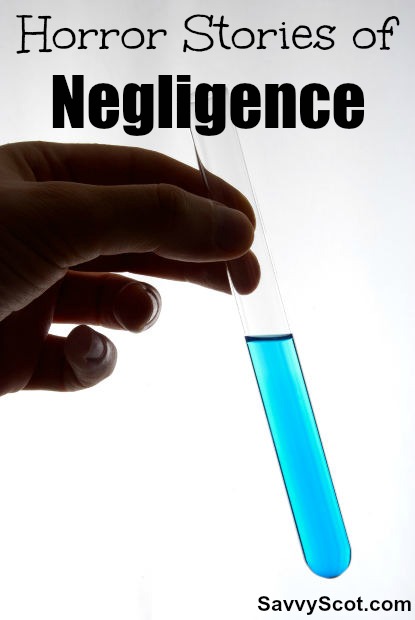 We have been talking about medical negligence a lot this month. A few days back I wrote a post questioning whether the UK is in fact catching up with the US in the lawsuit culture. An interesting idea indeed! Today I want to share a few stories of medical negligence that I have researched from various forums – some of which can only describe as outrageous! Medical negligence is a very sensitive subject and the consequences of medical malpractice can be huge – in some cases this actually led to loss of life.

Negligence – A Selection of Horror Stories

For the purpose of not being penalised by Google for plagiarism, I have condensed and rewritten the following case studies:

Similar Things Happen in the UK

Although most of the above cases originate in the US, very similar things happen today in the UK. Evidence produced on the Express Solicitors website states that complaints aren’t being properly dealt with by the NHS, and have risen by 50% in the last year. This can mean that patients are left feeling helpless and powerless by incompetent practice, when actually the libelous party should be held accountable for their actions. It is actually a lot simpler to start a claim than you might think.

The process of making a claim for medical negligence is best described in three simple steps as highlighted on the www.expresssolicitors.com site: Investigation, claim and litigation. The first step occurs after you contact a solicitors firm and you begin to compile a case. If your solicitor believes there is enough evidence of negligence you go to the second phase. The claim is sent to the defendant or their representatives and they have a given time by which they must respond. Very often cases can be settled outside of court which will significantly reduce the timeline to receiving your payout.

Have you heard any shocking stories of misdiagnosis?