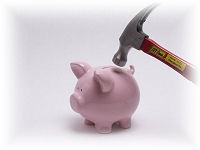 In the second quarter of 2012 (from April to June – often called simply Q2), individual insolvencies in Scotland were up by 5.3%, compared with the same period in 2011. In total, 5,601 people in Scotland became insolvent during this time.

If we look more closely, we can see the different kinds of insolvency that Scottish people took part in during the second quarter of 2012. There were 3,310 sequestrations (bankruptcies), with 1,563 of those people entering bankruptcy by taking the LILA (Low Income, Low Asset) route.

The LILA route can be a way for people who are struggling financially to become bankrupt even if their lenders haven’t agreed to it or taken action against them. Bankruptcies in general had risen by 12.3% over the previous year, while LILA bankruptcies had risen by 19.8%.

In England and Wales, meanwhile, individual insolvencies were down 10.2%, compared with the second quarter of 2011.

However, it’s hard to draw a direct comparison. The number of bankruptcies in England and Wales has been impacted by the introduction of DROs (Debt Relief Orders) in April 2009. A DRO is a way for people with a low disposable income and few assets to write off relatively small debts. The number of DROs rose by 9.6% to 7,956 over the previous 12 months.

An expert from Wilson Andrews in Scotland – who wrote this article – said: “Despite the drawbacks, it’s important to remember that insolvency can be the best way forward for people who are struggling with debts they can’t realistically hope to repay.

“If you’re struggling to keep up with your debt repayments, and you don’t know where to turn, it’s best to seek expert advice sooner rather than later. It may be that bankruptcy or a Trust Deed is the best approach to take – or there may be another debt solution that could help you get your debts under control before they get any worse.”