This is a guest post from The Frugal Vagabond, a personal finance blogger and software engineer living in the San Francisco Bay Area of California. He writes about personal finance, travel hacking, and early retirement, and is always looking for new and creative ways to live a life of his own design. He can be contacted on his blog, http://frugalvagabond.com. Let me know if you would like to guest post on SS.

Travel has always been a constant in the lives of my wife and I. Though we’re both Americans, we met in Edinburgh nine years ago when we came to run the Edinburgh Marathon. In the years since, we’ve become more financially disciplined, but we were always determined to keep international travel in our budget.

My wife and I aspire to retire by 40 to slow travel the world. We often discuss where exactly we’d begin. Portugal and Spain are currently the top contenders for our first destination. I have spent countless hours researching the visa requirements, costs of living, travel costs, and other logistical aspects of a move abroad.

Until recently, the idle research was enough to satisfy my simmering wanderlust. That changed when we took my wife’s father to dinner one night a few months ago. Out of the blue, he mentioned that his younger brother had recently retired, and that he was the last of this siblings not to have done so. With a dejected frown, he said that he would probably be working for the rest of his days.

This struck me as odd. My father-in-law is an intelligent man who had worked for decades as an engineer. He has a modest government pension. He’s a generous person, and prone to buying things for others to express his affection, so I knew he hadn’t saved much beyond his pension. Though I worried that I might be overstepping my boundaries, I asked my father-in-law how much he was entitled to on a monthly basis from his government pension. He answered that he received a check for a little over $2,000 USD (£1,550) each month.

I was floored! My father-in-law was sitting on a veritable fire hose of income by global standards! I immediately began to do the mental calculations, rattling off the places in Southeast Asia, Eastern Europe, Portugal, Spain, and elsewhere that his income would provide an absolutely luxurious lifestyle. Though he’s not the adventurous type, even my father-in-law started to get caught up in the excitement, and it seemed that a seed had been planted.

That night, as my wife and I drove home from dinner, inspiration struck. If my father-in-law wasn’t aware of the fact that retirement was within his grasp, how many people might there be all over the world who were similarly in the dark? How many people would consider a retirement abroad, but simply had no way of knowing what it would cost, or which places would suit their standard of living? How many families yearn to spend a few years abroad but don’t know where to begin? I arrived home and immediately set to work. Several months and many sleepless nights later, my pet project was ready for public eyes. 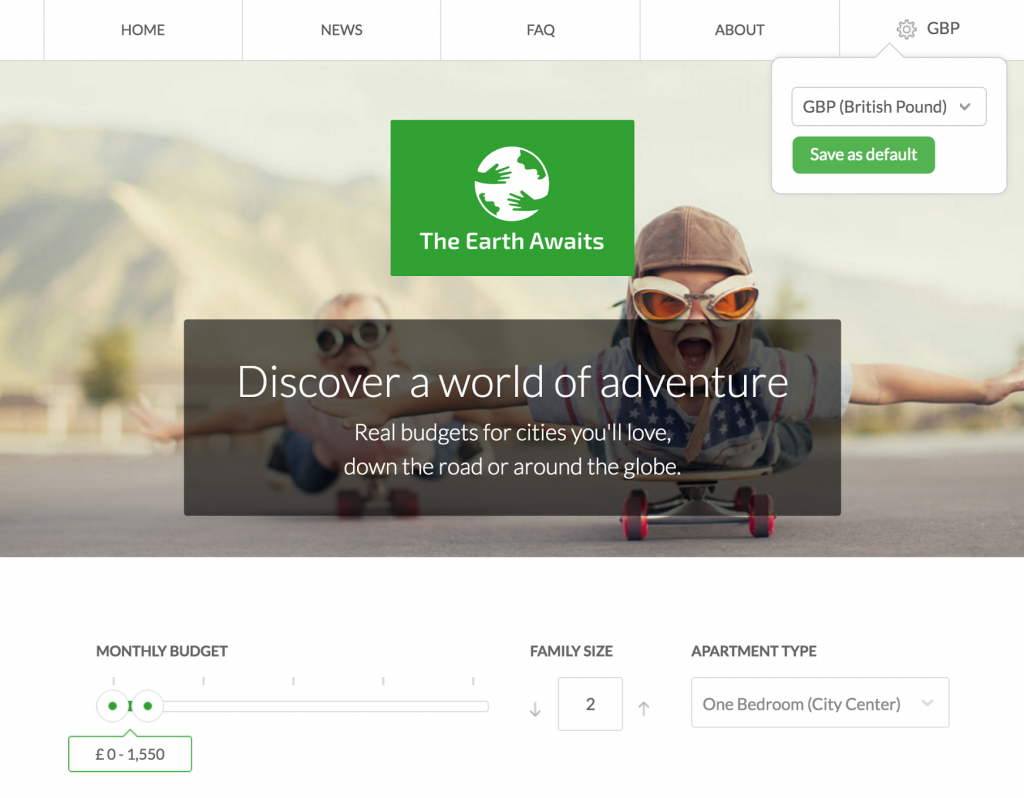 It’s called The Earth Awaits. On a basic level, the site takes your inputs for your monthly income, family size, housing needs, and lifestyle (from lean to opulent) and produces custom budgets for almost 600 cities worldwide. It also filters on important quality of life factors like crime, pollution, and personal freedoms. The result is a curated set of cities that match your tastes, budget, and lifestyle! By taking into account your specific needs, the site can help you to discover cities you hadn’t thought of, or that you didn’t believe you could afford.

One of the major issues with cost of living sites on the internet is that they rely on crowdsourced data and produce a single, “canned” budget number, as though we are all the same! The Earth Awaits uses crowdsourced cost of living data, too, but it builds the budget in real time based on your inputs so that it aligns with your specific needs. If you are a single person with a modest lifestyle, you are obviously going to spend less in a given city than a family of four with expensive tastes!

Even better, the site exposes the line-item budget for every city, and you can edit the automatically generated budget to suit your tastes. Once you’re satisfied, you can download a copy of the budget for later use in any spreadsheet program. You can share cities and budgets with friends and family using social media sharing links. 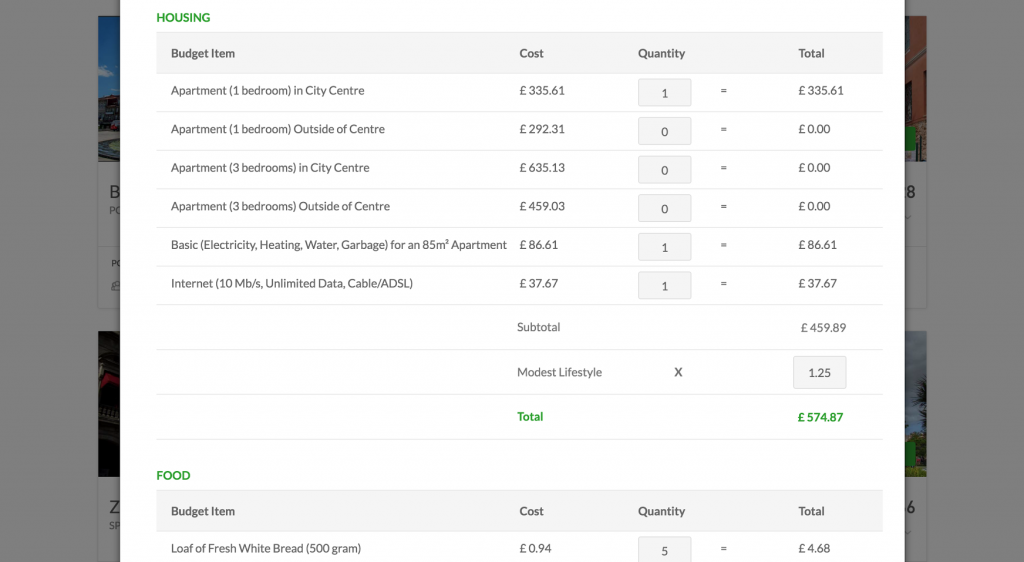 The Earth Awaits is simple and beautiful to use. All prices and budgets can be viewed and edited in US Dollars, Pounds, Euros, and a variety of other currencies (with more being added all the time). In the future, it will be possible to store your custom budgets, save favorite destinations, and contact expats living in your perfect city abroad.

The Earth Awaits isn’t a money-making venture or the product of a corporation— just a labor of love by one person who believes in the transformative and enriching power of travel. It makes me particularly giddy to be sharing it with a Scottish audience. Had we never visited Scotland, my wife and I would never have met, and this tool wouldn’t be here today! I’m grateful for feedback and suggestions. If there are cities that interest you that you’re unable to find in the search, please reach out to me and I will be happy to add them.

Recently, one of the early users of The Earth Awaits contacted me and excitedly shared that thanks to a few nights of research on the site, he and his wife had decided to accelerate their retirement date by over two years. Needless to say, that was a gratifying and exciting thing to hear! It’s my hope that someone reading this post right now will have a similar experience, and will be enjoying an amazing life of adventure abroad someday soon with help from my little side project.