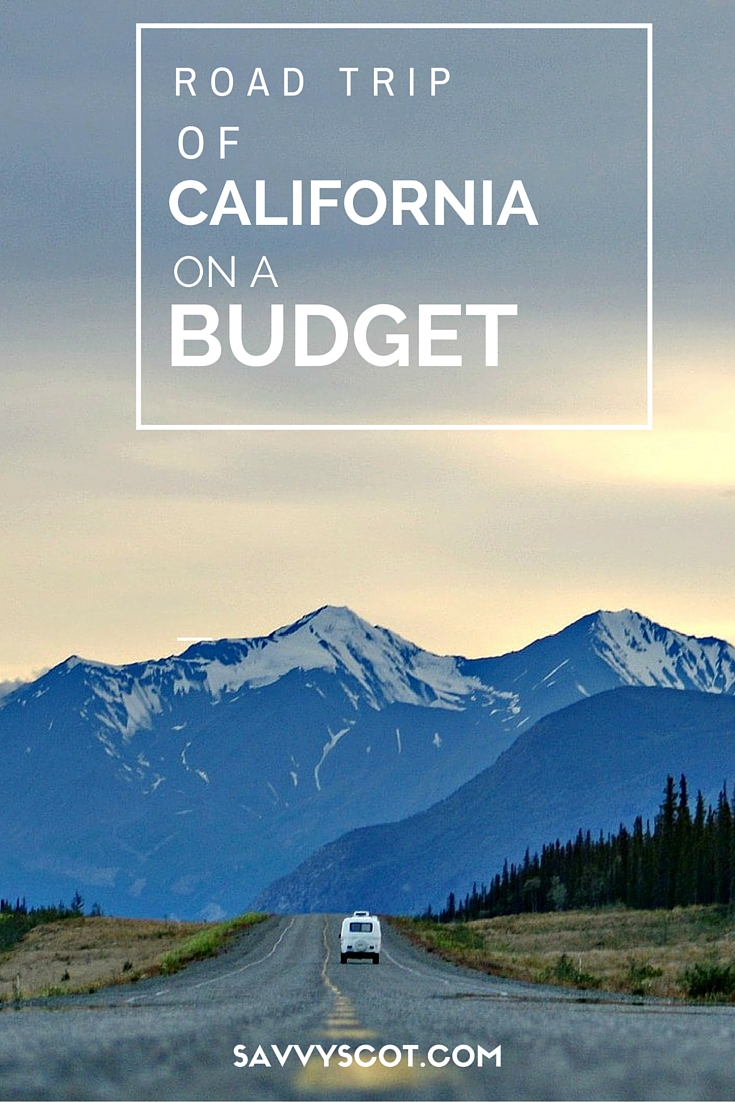 I am pleased to bring you a guest post today – combining 2 of my favourite things – saving money while traveling! 😀 Enjoy

As the self-proclaimed “tightest man in the world”, my better half’s grand idea of going on holiday to California for 2 weeks, was not my first choice when we came to book a trip away last year.  I was up for going to Rhyl for the weekend, but unfortunately; she is “worth far more than that”.  Calm down luv I said, I was only joking.  How about Barmouth?

With money saving and scrimping being on the top of my priorities for any holiday, this was going to be a big task.  First thing I did, was manage to haggle down from a 2 week trip to a 10 day one.  I would later come to regret this, but at that point I was happy with the money that I would save.  Yes; it’s sad, but I am that tight.

Okay, so now to book the flights. I signed up to Quidco.com, it only took about a minute, literally and I saved £25 each on the flights.  Not fantastic, but not bad for 1 minutes work.  We were flying to San Francisco on May 27th for £570 each.  For my Travel Money I visited MoneySupermarket and saw that I may as well just pop down the local Post Office. I had to wait a few days for them to order in the dollars, but that wasn’t a problem.

Accommodation was next.  Having been to California in 2008, I had learned not to book all my Hotels/Motels before going on holiday, but to book the hotel for the first and last night of the holiday only.  The first time I went to San Francisco, I had spent hours on the internet trying to find some fair priced accommodation but couldn’t find anything to fit my budget.  I can’t remember if I just gave up, or forgot to book any accommodation, but we had only booked the first night’s accommodation.  This worked out fine, there were dozens of cheap motels in San Francisco and pretty much everywhere else we went to in California, and Nevada, that I couldn’t find online.

This works well for another reason.  If I am on a road trip of some part of America, without a Sat Nav (which I invariably will be, because I’m too tight to fork out for one and I love a bit of navigating), then my schedule will likely go out of the window.  I tend to keep driving until I am tired, or until I find somewhere I want to stay and just find a cheap motel nearby.  A bit risky perhaps but my preferred method.

For the 2011 trip, we booked the Lombard Motor Inn; which cost around £80 for 1 night.  There are cheaper motels on the same street, just Google “Lombard Street Motels”.  Some are a bit worse for wear though and you can’t always book online. Unlike back in 2008, the majority of hotels and motels are listed on Google Maps.  It’s a good shout to stay on Lombard Street as it’s right in the middle of San Francisco, so you know it’s not somewhere that claims to be in San Francisco but in reality is on the outskirts and is a 30 minute drive into the city center.  The Motor Inn was pretty nice and the staff were really friendly, which is always a bonus.  If you are looking for a clean and tidy yet no frills place to stay, then it gets the thumbs up from myself.

For the car hire company “Dollar”.  The problem I found, with choosing a car hire company, is that they all have pretty horrendous reviews!  I suspect that a few will be franchises, so the service you will get might be specific to the car hire center you are using.  So it’s worth while searching ‘geo-specifically’.  For example “car hire rental San Francisco” brings up City Rent A Car which has really good reviews.  You can also get a Google map of car hire places in San Francisco.  I opted for the Dollar Car hire on O’Farrell Street.

I decided not to get my car straight from the airport because all the online reviewers had complained about the massive queues, which were a nightmare to endure after long flights.  We picked up the car on the 3rd day of our trip.   And what a beauty she was.  Having booked  a Chrysler Sebring, I was surprised but not disappointed to have been presented with a Jeep Compass.  Please see picture below that looks like I’ve superglued my hand p to the bonnet. 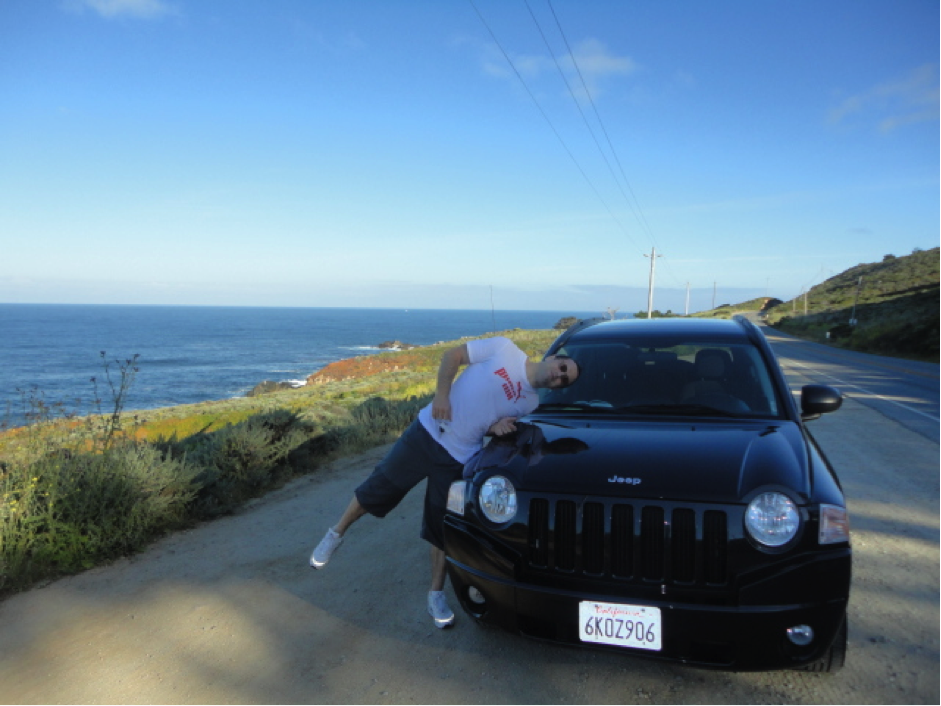 One thing we did manage to do, which I wouldn’t recommend, is miss our trip to Alcatraz.  Gutted! In turns out that there are 2 O’Farrell Streets in San Francisco, or one very disjointed one at least.  Just look out for that if you decide to use one of the several car hire places located there.

We didn’t pick up the car until day 3.  On day 1 we just went for a walk about as it was too late to do much else.  Day 2 I went to a Thai Boxing boot camp at a gym 5 minutes walk down the road called K-1.  The class was really hard, especially with jet lag.  All the lads there were nice though, one of the highlights of my trip.  Later that day we went for a meal by the Warf and then went to the local supermarket to get a load of supply for the road trip.

Day 3 was the start of the road trip. Driving the car for the first time is quite a traumatising memory.  Having never driven a Jeep or 4 by 4 previously; driving it out of the underground car park and then through the center of San Francisco was quite an initiation.  I soon learned – thanks to everyone beeping like mad behind me, that flashing amber lights at a 4 way junction indicates that everyone takes it in turn to move across the road.  At the same point I also learned that if automatic cars will roll backwards if you take your foot off the break when stationary on a hill and that Jeeps do pretty good wheel spins.

We traveled down the coast on “Route 1” to Big Sur only to be met with a traffic jam, that had been created because someone had driven off the side of the road and off a cliff.  “Inconvenient” I thought, but then my concerns turned to the gentleman being airlifted to hospital, especially as all the American onlookers were exclaiming how much it was going to cost him to pay for the air ambulance.  One bill I managed to avoid; thankfully. 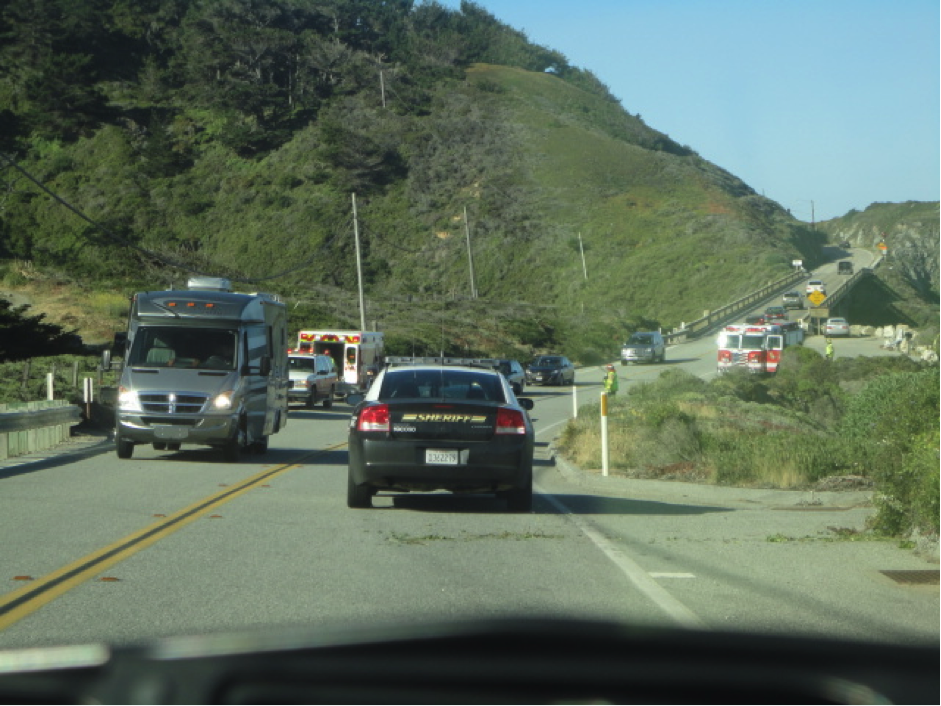 The restaurant we had visited was called the River Inn. The food was nice and it was reasonably priced as well.  However, the waiter informed us that there had been a landslide further down the road and that our route to Malibu had been blocked. He recommended that we turn back and take another route.  There was a route up the side of the hill but it was very dangerous.  Thinking I was a hero, I opted to take the dangerous route.  In spite of my bravado; I bricked it, the start of the route was like an extremely narrow county lane but with a sheer drop at one side.  I’d get used to these type of roads by the end of the holiday though!

Having planned my route on Google Maps prior to commencing our journey, I had a predicted drive of 6.5 hours from San Francisco to Malibu.  Having took the long way round however, this ended up as 15 hours; nightmare.  It was definitely an experience though, driving through an Army base and visiting a pub/diner in the absolute middle of nowhere beats the hell out of visiting your usual American Tourist Trap.   At one point there was a tank pointing at us. This was turning into a right, unintentional adventure. After driving for so long however, I really could have done with a day or 2 off from driving, but with my 10 day schedule being so tight, I couldn’t!  oh, and my girlfriend didn’t fancy driving either. 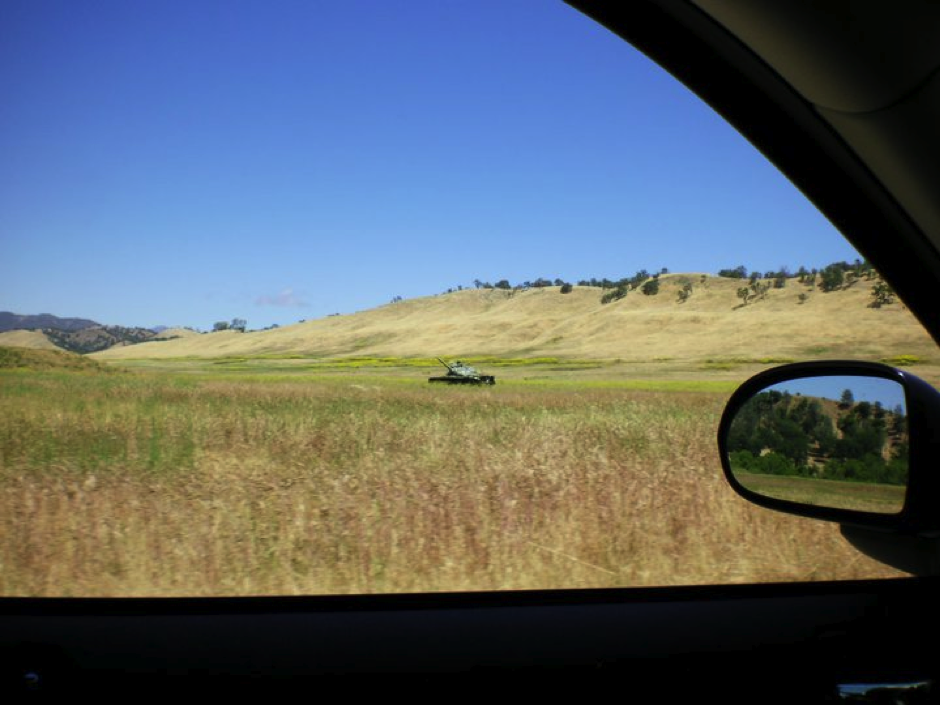 We got to Malibu at about 9pm and struggled to find somewhere to stay. We managed to get the last room left in the Malibu Motel for $130.  Room wasn’t bad either. 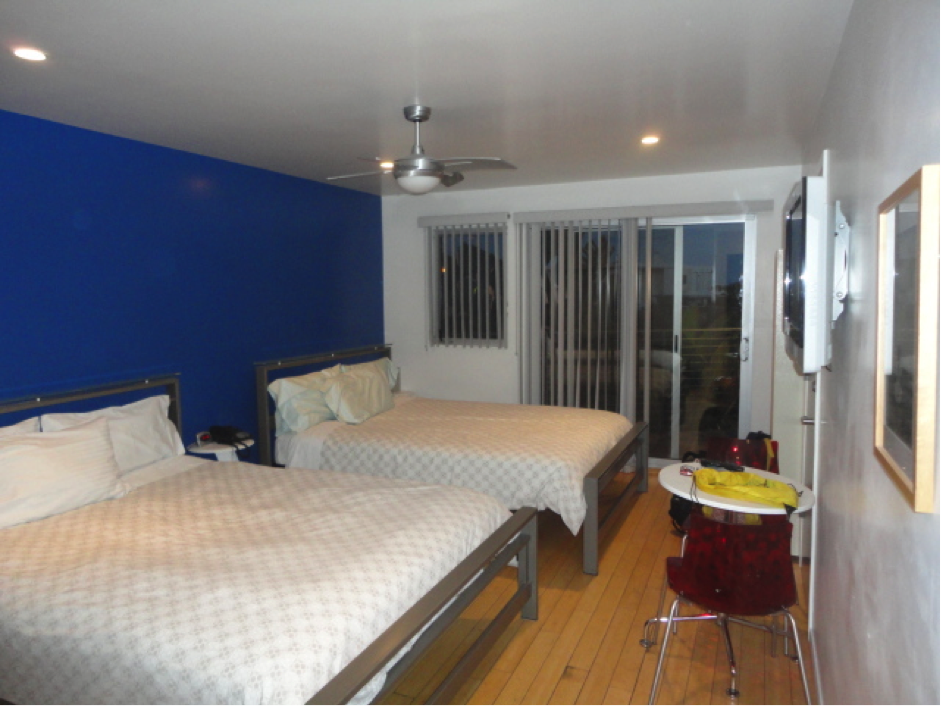 Day 4 – we stayed in Oceanside Motel 6. Which was pretty much a dump but only cost $70.  We opted to sleep in our sleeping bags, on top of the beds!
We ate in Dominics Restaurant, which was great value and the atmosphere was brilliant

Day 5 – Travelled to San Diego and Sea World.  The Tickets were $60 which isn’t bad. Too busy and too much of a tourist trap for me though

Day 6 – Made our way up to Yosemite.  The road was mental though due to the amount of snow. We visited Stanislaus National Forest which was full of Redwoods and stayed in a B & B nearby called McCaffrey House.  It was fantastic and cost $170.  Day 6 deserves some photos – 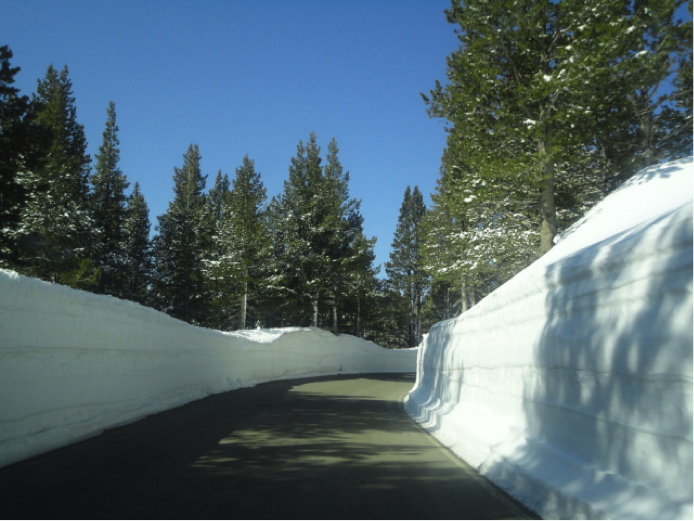 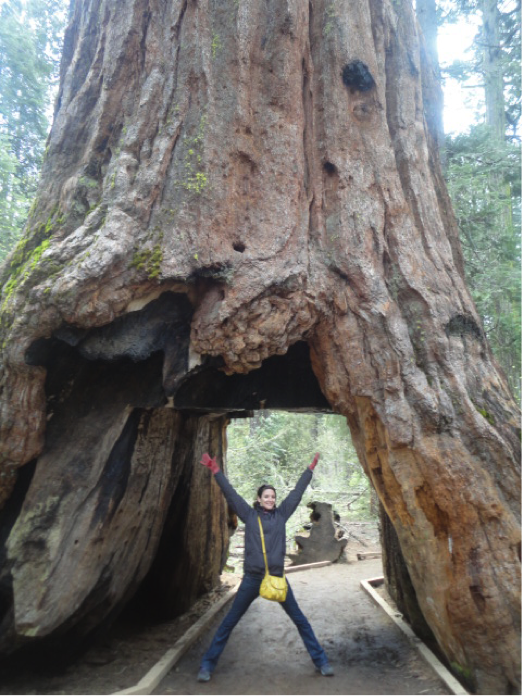 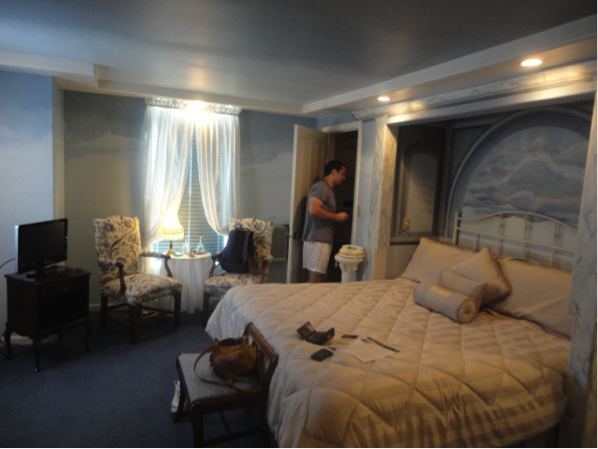 Day 7 – we left at 5am to go to Yosemite National Park which was about 30 mins from the B & B.  This was easier than it sounds because California is 8 hours behind the UK and 5am is 1pm in the UK.
The entrance fee was $20; best money I’ve ever spent.  Again, needs a photo to show you – 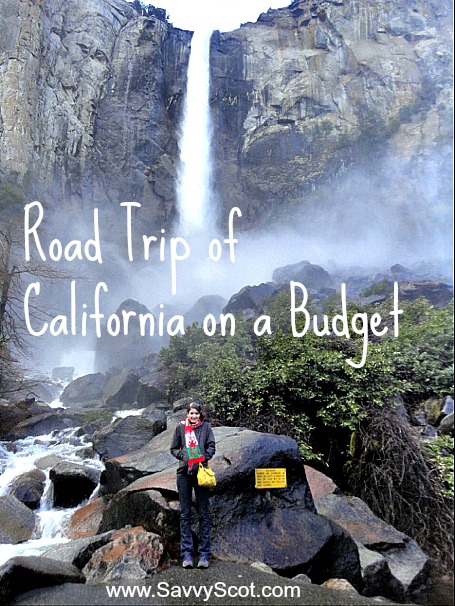 I would recommend getting there as early as possible.  It was rammed with Japanese tourists by 9am.

Day 8 – We headed to Mammoth Mountain.  Still snowing, even though it was now June!  We stayed at the Quality Inn for $120.  The room was okay.  The door lock did manage to break though and we couldn’t get in for about 3 hours.

Day 9 – Lake Tahoe – Amazing!  There was hardly anyone else there when we visited the actual lake.  Beautiful place, water was freezing though.  We stayed in a Super 8 Motel, it cost $50, but what a dump!  I wouldn’t recommend.

Day 10 – Back to San Francisco.  We got back in time to do a cruise of the bay (and under the bridge) which cost only $55 for the two of us.  Definitely worth it!  We stayed at the Motor Inn on Lombard street again for the final night.

I don’t know about you, but this post has given me itchy feet…. again – and I just got back from holiday!!