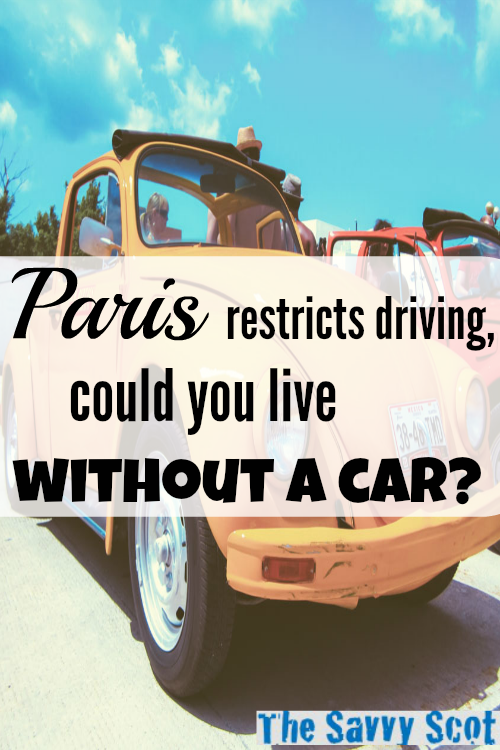 For the first time since 1997, the city of Paris is limiting car circulation to try to get rid of a big smog cloud that has been looming over the city for too long.

According to Reuters, the pollution levels are very high, the European Environment Agency (EEA) reported147 microgrammes of particulate matter (PM) per cubic meter of air in Paris – compared with 81 in Berlin and 79.7 in London.

The mayor decided that as a result, you would be allowed to drive your car every other day, based on your number plate’s last number, while public transportation will be free, including public bicycles and electric car-sharing.

I remember when the last car ban was implemented, as I was in high school, it looked like a summer day, when half the city would be away on holiday. Traffic was very light but people were also freaking out about being able to get to work on time, and the public transportation system was crowded.

Having now owned a car until I was 29, I am pretty sure I would have been just fine without driving for a day, especially since on the next day you can do whatever you need your car for, like a big grocery shop or driving your kids to karate lessons. But I know many people who wouldn’t trade a car for the world, even if that means commuting in high traffic for almost an hour each way, when the train could take you there in less.

They like the privacy of their car, listening to the radio, being seated as it gets hard to get a seat on the morning train unless you live at the end of the line and can garb a seat from the start. They are ready to exchange that for extra commuting time and extra expenses, as they need two cars for the household, insurance, gas money, and the higher mileage demands more maintenance.

The ban in Paris is not such a big deal as the city has an ample network of buses, trams, tubes and trains. But some suburbs only have a bus every 20 minutes or so during rush hour, and one per hour in the middle of the day and on weekends. It would be hard to live there without a car, you would really have to be in sync with the bus, and even then you would only have one line that would take you to the train station, that would take you to the next city you need to go to, where you get off the train to get another infrequent bus.s

Living in the center and close suburbs makes it really easy to ride the bus, but it can become a nightmare outside.

Enters cycling, which is very dear to me and a fabulous way to stay fit while moving at a decent speed. Suburbs are usually a few miles apart so walking is difficult. Cycling in Paris is a breeze as the mayor has done a really great job of putting cycle ways all around. A little too much would say the hard core cyclists, as with the bicycle sharing system, many beginners take a bike and peddle like crazy against the traffic, as some of the bike lanes are just that you can take a one way street on the opposite side, which is really dangerous when a pedestrian crosses without looking both ways.

I used to have a bicycle with panniers, so would be able to go shopping with it, commute to work, and put it on the train on weekends so I can use it locally when exploring a new city.
The only drawback about cycling in Paris is the weather. In winter when it is cold and humid and dark by 5pm, it is tough to find the motivation to cycle. My mother does it but she has an electric bike so she can be home quicker than if she had to peddle.

In any case, I would always prefer a neighborhood where I don’t have to rely on a car, because like this ban, you never know what will happen next, so better be able to walk to the supermarket, other shops, the kids’ school, etc.

Can you live without a car?