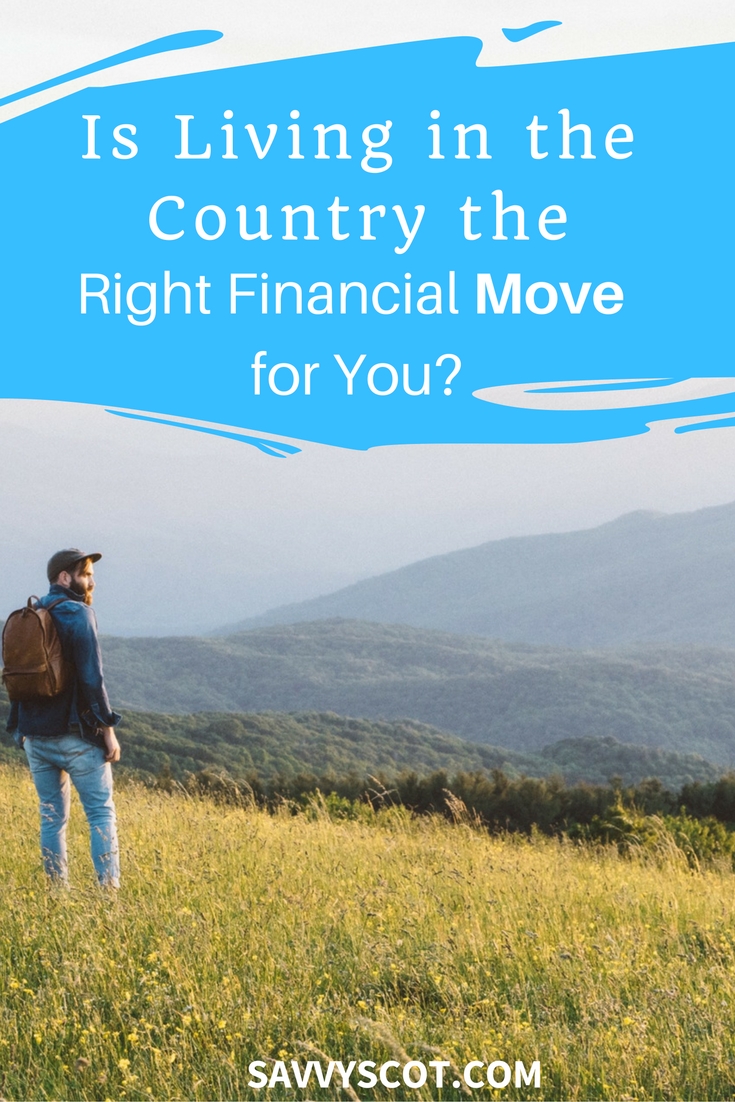 I grew up on a farm in a very rural location. We had livestock, farmland and our closest neighbor was barely within walking distance. What a change from the city life that most people experience in the 21st century.

After graduating high school, I moved to a city to go to college. I later lived in a few cities with populations greater than 200,000 people. What a difference indeed.

For this blog post, I’m considered the differences in finances between living in the country and living in the city. There are quite a few to consider:

Saving Money in the Country

One of the best reasons to live in the country is you’re not as directly pressured to ‘keep up with the Joneses.’ Most countryfolk don’t make much attention to the niceties in life. You won’t be constantly pressured to buy a BMW like your city neighbor. There’s definitely more of a natural frugality that rises out of the countryside.

The cost of a home is also much cheaper in the country. For what you could buy a studio apartment for in London, you could get a nice estate in the countryside. Which would you rather have? A studio? Or an estate? Your money goes further in the country. You can also have a car too if that’s your thing. Living in a big city makes owning a car difficult.

Utilities are usually cheaper as well. Things like water aren’t metered. You have your own well. Drink and use all you like – the only added expense is electricity.

Extra Expenses in the Country

The biggest extra expense is driving. Yes, you will do a lot of it. Every time you need to go into town, you have to consider fuel and wear and tear on your car. The expense of traveling is something to consider. Britain is the most expensive place to operate a motor vehicle. If you have kids, this especially means a lot of driving. Also consider the somewhat wasted time you spend driving. This adds up. If you spend an hour a day driving, that’s 365 hours each year. That’s over 15 FULL 24-hour days spent driving each year.

Another expense of living in the countryside can be added maintenance to your home and grounds. If you’re living in the country, you probably have some land. Taking care of the land well requires time and resources. Expect to spend many Saturday’s mowing, pruning, painting, excavating, raking, planting, staining, etc. This isn’t really a worry if it’s what you enjoy. But it still takes time. If you want to hire it out, then it will take money as well. Be sure to account for maintenance when considering your move to the country. It’s often an afterthought but it is important.

Another thing to consider is the extra cost of internet. Most often, internet is cheaper in town. In the country, it’s often done via expensive satellite or radio signals. This can cost double what you pay in town.

Saving Money in the City

The biggest cost savings of living in the city is transportation. You needn’t spend much time and money driving. Sometimes you don’t even need a car. Public transportation is cheap. Riding a bicycle or even walking is nearly free.

The internet is also cheaper in the city, as a rule. You also have more speed selections. If you use the internet quite a lot, this may be reason enough to justify the higher city costs.

Price comparison is also something you can get easier in a city than in rural environments. Small villages usually only have one or two stores. In the city, you get a big selection. With all that competition, the stores need to fight for your business.

Extra Expenses in the City

The peer pressure to spend is much greater. It’s also easy to go shopping just for fun. That can be dangerous. It’ll also be easier for you to go out to eat so you may do that often as well. The price of a home increases dramatically in the city. While this seems bad at first, this also means you could get more if you rent out a room or a carriage house. Property taxes will also be much higher in the city.

Something else that’s important to consider is opportunity cost. Often, there’s more money to be made in the city. In a rural setting, you’re job is often the only one in the area. If you quit or get fired, you may have to move. In the city, you can likely find an open position in your neighborhood. Living in the city also gives your children more opportunities. If you live in the city, they can more easily pursue their interests. It would be a shame if your child was good at basketball but didn’t have a good place to play if they grew up in the country. A city can more easily foster that growth.

Countryside or urban, there is no right answer. If you pick one or the other based on income/expenses alone, you may not be happy. You should probably pick which will make you happier. Happy people have high net worths.