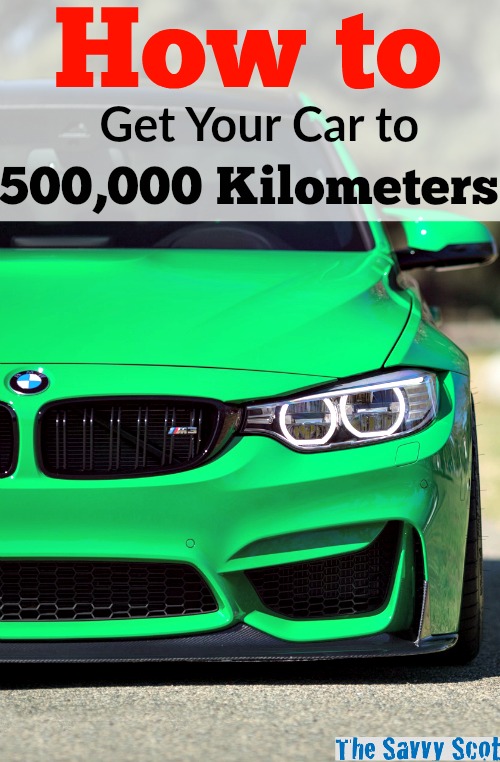 The last car I owned had nearly 500k KM when I stopped driving it. The only reason I’m not still driving it is because I was side swiped while passing through an intersection. And actually, the car still ran fine. But the insurance paid a lot more than the car was worth so I let them take it to auction. The car is probably still driving around today.

Here’s the history on the car. It was a GM car that was not known for being particularly reliable. My parents bought it off-lease with about 10,000 KM on it. The following post describes what we did to get her to 500,000 kilometers. And before you go thinking we babied the car or spent a ridiculous amount of money on preventive maintenance – that’s definitely not true. Everything we did, you can easily follow as well.

Use the Car for Its Intended Purpose ONLY

This is something a lot of people don’t think about. See, when a car is built and sold, it’s built and sold for a very specific purpose. Sports cars are meant to be driven fast – your 4-door sedan hand-me-down is not a sports car. Therefore, a person should use a car like that for commuting and commuting only. That’s what it was designed to do – get a person from point A to point B and nothing else.

What happens with cars is people often buy them, begin doing things with them which was never the intended purpose and then complain when things break. If you focus on what a car does well, and exploit that, you’ll do just fine.

If you’re having a hard time determining what your car was built for, browse old sales literature. See what the people are doing with the car in the pictures. If people are taking the car to the grocery store and not the race track, that’s a pretty good sign you have a grocery getter and not a race car.

Love the car for what it is – not what you want it to be. Same goes for girlfriends/boyfriends.

Be Religious About Oil Changes

You’ve just got to do them. Your car, unfortunately, does not have a kidney which cleans its life blood (oil). But it’s not as expensive as you may think. I do all the oil changes myself. It’s really easy and requires few skills or supplies. Once you’ve done it a few times, it is actually a fast process.

Always use the proper oil and oil filter for the car. Do not just use whatever oil you can find on sale. I personally avoid buying oil from big box retailers. To reduce costs, they often get a blend that hasn’t been as refined as with speciality stores. IE: You get what you pay for. My uncle used big box oil in his ATV. The motor blew up after a year. The mechanic’s first question for my uncle was, “Where do you buy your oil?”

Do Not Be Penny Wise, Pound Foolish

It’s really hard to get caught up in the minor costs of owning a car. These are things like being too cheap to buy a tire pressure gauge. Or not fixing a small leak because it doesn’t seem like a big deal. Instead, fix everything that breaks – even if it’s pretty minor. Often, minor problems turn into major problems. Small leaks turn into big leaks. Small dollars turn into big dollars.

If you fix the problems early, the car will never leave you stranded.

No Need for Snake Oils

By ‘snake oils’, I mean any type of additives you find at automotive stores. They are usually things you can put in your radiator, fuel tank or oil. Most of those products only sell because of their packaging. There’s very little need to run any of these products. Although an expensive fuel system cleaner can help clean your injectors. And a fuel stabilizer is recommended if you don’t drive your car often. But unless you have dirty injectors or don’t drive the car for a month or more, forget about these products.

I believe this part to be very important.

Now, you don’t need to warm up your car as some people believe. That’s a waste of fuel and time. This was only true with carbureted cars. But if your car is newer than the mid-80’s, it’s probably fuel injected.

But, cars were designed to run at normal operating temperature. So before your car’s temperature gauge reaches about the middle, it’s still a little cranky. Running a cold engine hard causes premature wear.

Drive gently until the car is warmed up. It’ll get warm within about 5 minutes so this isn’t too much to ask. The best way to avoid driving her hard while cold is not to be late out the door of your house. Plan an extra 30 seconds for conservative driving.

Many cars nowadays are capable of lasting 500,000 kilometers. If you do the steps above, your car can make it. See you out there!