I have been waiting to write this post for a while. As some of you will know, Mrs Scot and I visited Roatan in June and had a very pleasant outward journey with United Airlines. What I didn’t tell you is that we sure as hell paid for the good luck on the return journey. 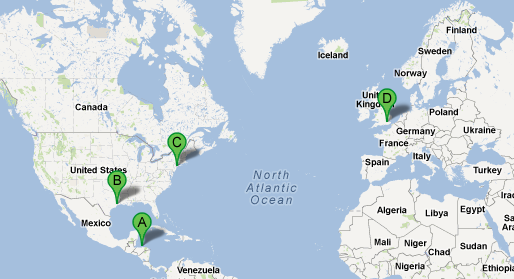 Roatan to Houston to Newark to London

Our return journey was always going to be tight. We had only 1 hour and 15 minutes to connect in Houston, where we were also required to clear US immigration and customs and recheck our bags. It was a United Airlines flight the whole way back, so I knew that they would wait for us, provided that our flight was running on time.

The Start of a Bad Day

We arrived at Roatan airport waaay early (like 3.5 hours early) to ensure that we could get those exit row seats and that we wouldn’t miss our flight. Our schedules were tight, with our estimated arrival time in London at 10pm on Sunday night, with us both due in at work 8am Monday morning.

We checked in without hassle and waited in the departure lounge. We waited and waited and waited. I got this gut feeling that something had gone wrong and decided to check United Airlines flight information, courtesy of the free WiFi in Roatan airport.

Mechanical Failure – 2 hour delay. The worst sentence ever. The words burned by eyes… GUTTED! I immediately started planning alternative routes back with my phone and taking screenshots, trying to educate myself on the alternatives before calling customer care. I figured that if we could get a direct flight back from Houston the next day we would still make it home on time (this was Saturday – we had a 10 hour wait in Newark Airport).

Although a pleasant chap, the United Airlines customer service representative couldn’t do much. Because my flight wasn’t yet officially late (even though the plane was still in Houston), he couldn’t amend my booking. He assured me that there would be staff on standby in Houston, ready to help. We sucked it up and tried to stay positive; we didn’t want this to ruin a fantastic honeymoon.

Our plane finally arrived and we made the short flight to Houston. Upon arriving, a handling agent handed us replacement tickets and tried to hurry us along. I noted that United had rearranged our booking so that we would fly on the next flight to Newark. They rearranged a single leg of the journey without thinking about the final destination. I wasn’t impressed.

Upon clearing customs and immigration, I spoke with another United Airlines agent at the customer service desk. He promptly informed us that they had held the plane and it was waiting for us. He took our bags off us and directed us towards the other end of the terminal. Our hearts lifted at the thought of an end to the disruption.

Picture Home Alone. Running through airports is not in the slightest bit fun. It is exhausting and you end up in a sweaty mess.

We eventually reached our departure gate and were met with the smug smile of yet another United agent.

Sorry the aircraft door is closed. It is federal law that it must now remain closed.

Is SHOCKING. I was so unimpressed. In fact, I was disgusted. Upon reaching the front of the queue, the handing agent welcomed me as follows:

Good Evening. I don’t want to hear anything other than what flight you missed. I deal with this everyday and anything else is noise to my ears.

I tried to explain the fact that our connecting journey to Newark was not important, but rather my concern was our final destination of London. I am unsure whether the man lacked basic common sense or he was trying to be awkward, but he was useless. Thankfully I had captured screenshots of all the alternative routes so was able to assist him in searching for the alternatives. That is not the way it is supposed to be… right?

After being told that he ‘could not help’ and to ‘step aside because the queue was getting too big and that I was taking up time’ I started to lose the plot. His supervisor was equally as useless and the passenger next to me (that the original agent was now dealing with) began to get irate.

Things escalated from here and people got very angry. Passengers started to curse at the horrendous attitude of these United Staff. At one point, a customer got so angry that the police were called. What is worse, is that they were actually employees of United Airlines and not handling agents working on their behalf. I finally managed to speak to the most senior manager on duty and rearranged our flights. I insisted that we were given an upgrade for our troubles and ensured that we were compensated for a hotel room and food vouchers. While the United ground staff manager handled things professionally, it was far too late to be impressed.

The rest of the trip was largely uneventful. That being said, we did have a 2 hour delay on the Taxi-way waiting for Air Force One to take off and disappear… We flew home via Chicago and indulged in some AMAZING butter popcorn to comfort ourselves:

This is not a sponsored post for Garrett Popcorn, but WOW you should try it! Probably about 5000 Cals per bag, but boy does it pick you up.

Upon arriving back in London, I was still extremely frustrated with United Airlines. I usually find that annoyance related to traveling simmers down when you reach your destination; but not this time. United Airlines C.E.O. Jeff Smisek has recetly launched a campaign aimed at improving customer service and the image of the airline. Mid-Journey I decided to write to him the following letter (the grammar reflects my tiredness) 😉

I am writing in regards to my current situation:

My wife and I were returning from our Honeymoon in Roatan. I paid a premium by booking our ticket from London to Roatan with United Airlines directly (instead of through a travel agent), so that we would have the flexibility to choose our route to arrive in London on time for work. Our return journey consisted of   Roatan – Houston – Newark – London (booking XXXXXX)

Unfortunately, there was a mechanical failure in one of your aircrafts which caused the Roatan – Houston flight to be delayed and caused us to miss our connection to Newark (and therefore the connection to London which we are supposed to be on right now). Upon speaking to United airlines ground staff, we were told that the flight was being held for us in Houston; we rechecked our baggage and made a run for it, but unfortunately the aircraft door had already been closed.

There were numerous other passengers in the same situation, however I believe and would expect that the situation could be handled adequately by your ground staff. I first dealt with ‘Alex’ at the service center at Terminal C (2100 hrs 06/16/2012). Alex was extremely rude to myself and other passengers. After viewing your excellent take-off video a few times over the last few weeks, I fully expected to be treated well with United. Alex came out with comments that “There is no point in you telling me anything other than you missed your flight because it is noise to my ears” and “Just be Quiet, do you not think I have heard this before”. While I understand that your customer service agents are used to dealing with problems; not all of your customers are. Empathy goes a long way. Alex could not handle the ‘complex’ nature of our booking due to our request that we arrive back in time for work on Monday morning (0700). We then spoke to Patterson Travernier – a supervisor – who was also unable to assist. He then called ‘Martha O’neill’ who I believe was the most senior customer service agent on duty to assist. Unfortunately the best she was able to do was book us on a flight via Chicago, arriving in London at 0830 (UA928). By this time, my wife was in tears after the realisation that we would both be late for work and the premium ticket price that we originally paid was wasted given that we would not make it on time for work.

In addition to the delay on our return journey, we have lost out on a hotel we had paid for in Newark. The ground staff were unable to locate our cases, so we have no clean clothes during our delay. We will also now be traveling through the night instead of during the day like we had originally planned.

Mr Smisek, I appreciate that delays are inevitable; but I expect more from United. I work for (removed) and frequently travel to Houston.We have the option to use United for our (Business) travel, however I have had a completely different experience as to what I have grown to expect from United; in addition to a disappointing ending to what was a fantastic honeymoon.

I appreciate you taking the time to read this.

A few weeks later I received the following reply:

Thank you for contacting United Airlines.  Best wishes on your marriage.
We appreciate the time you took to let us know about you and your bride’s experience. I sincerely apologize for the disruption in your travel plans.
Your travel experience should reinforce your decision to choose us.  Your feedback is more crucial than ever and your comments regarding the customer service staff at Houston will be shared directly with our corporate management team.
My apology cannot erase what happened, but I hope it helps to know we take your concerns very seriously.  We are grateful for your business and welcome your future business.

In recognition of our appreciation for your choosing United Airlines for such a special occasion, I am sending each of you an electronic travel certificate via separate e-mail that may be used toward your next purchase.

Although my reply is brief, please know that we are working hard to build an airline that will earn your confidence and approval.  Please accept my apology and allow us the privilege of serving you again on board a future United Airlines flight.

The result? $500 towards our next United flight. Not too bad a reward for writing a letter.

$500 is probably just the right amount to persuade me to book with them again and give them another chance.

What have your experiences been with United Airlines (Good/Bad)?