A couple of weeks back a good friend of mine came to stay on his way to moving abroad. I planned my work week around his visit to ensure that I could work from home to maximize the time spent together and that most of my late night meetings were scheduled before and after he arrived.

Picture this: It’s Friday night and we have a fun night planned – a car full of food and booze and a movie on the sky box waiting to be watched – when all of a sudden **BANG** there is a blow out!?

Are you kidding me? I could not believe my luck. Firstly, I have never had a blow-out in the past 8 years of driving (I am getting old) and secondly, I have never seen or felt such a sudden thud so unexpectedly! Thankfully we were close enough to a safe spot where we could pull over, but upon inspecting the tyre it was absolutely shredded. There was no way in heck that anyone could salvage it with a repair job.

Long-term readers of the blog will know that I drive a Honda Civic. While I absolutely love the car, Civics do not carry spare tyres (a tactics many manufacturers use to artificially lower the emissions and hence tax category of the vehicle) and this annoyance became all to real on realization that I needed one badly! The substitute inflatable foam was as good as useless given the state of the tyre.

Now I have a confession to make. While I made sure and took precautions by taking out Breakdown cover with the AA for Mrs Scot’s car, I hadn’t ever got round to switching mine over from my old car. ERROR! I ignorantly made the assumption that because I drove a newer car I wouldn’t need it!

Fear not, this story has a happy ending. It just so happened that my friend was also covered on the AA through his bank. Thankfully (and for some unknown reason) he hadn’t got around to cancelling the premium account yet – baring in mind he was moving abroad – and the cover was valid for any car he was a passenger in! We were able to call the AA and get a tow back home with probably the coolest ever tow system that I have seen: 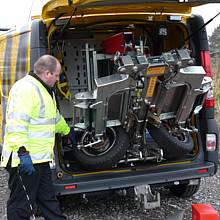 Can you believe that this contraption comes out the back of a van! The engineer inside me was amazed!

There was a very good lesson learned here. No matter how new your car is, or how well equipped you are to deal with tricky situations – you can never be too sure. The day after the car was recovered, I signed up for a premium bank account too and now have full cover for any future unwanted incidents!

We always think that these things won’t happen to us, but you really quickly realise how helpless you are when something so small as a blow-out happens! Thankfully there was no damage to the rim and I got two brand-spanking new tyres at Costco the next day!

Do you have breakdown cover?