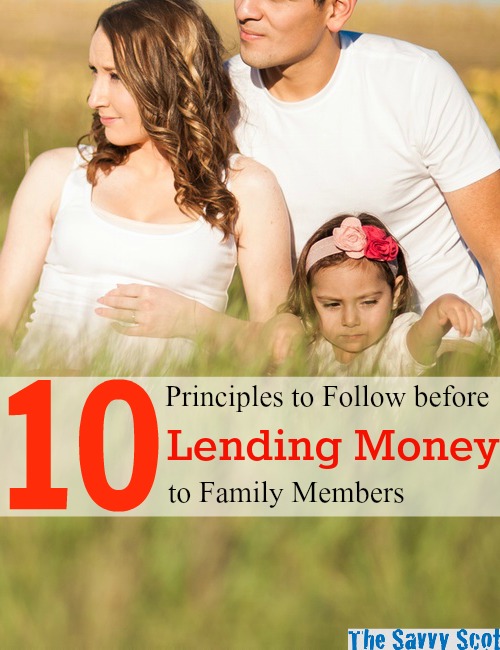 Lending money to family and even friends isn’t the most comfortable thing to do in the world. Sooner or later a family member who is in need may ask you for a loan. When this happens, you at first may feel in a weird position. On one hand, you may feel responsible about giving him an aiding hand. On the other hand…well, if he never pays back relationships can be harmed between you and that person and his family. Learn the following 10 principles so you are prepared to face this situation even before it presents itself.

You own your money. Thus, you can decide to do with it whatever you like. The first principle is about developing autonomy and you having the ability to decide what you do with your own possessions. These are funds you have earned with hard work and you shouldn’t be giving them out every time someone asks for them – even if it’s a relative. Initially, they may not like it but time will completely soften whatever reaction he or she may have towards you.

2. Keep it a Business

Make the borrower understand that this is not a favor and that you expect the money to be paid back (optionally with interest). It is always advisable to sign a contract with exact terms of payments. Print two copies and make sure they are signed by both parties.

3. Tell Them it’s a One-Time Occurrence

When you loan someone a certain sum of money, it’s easy for them to keep coming back to you again, and again, and again. Stating upfront that this is a one-time occurrence and that you normally don’t do these types of things is a good way to keep them treating you like their own personal bank.

4. Don’t Forget or be Too Lenient about Payback

Whatever the payment terms you have set up, you should be asking about the payments before they are due. This is the best way to get your money back! If you don’t say anything, they will most likely than not be lenient about paying you as well.

Co-signing for a loan or credit cards spells disaster. With the cash you lend, you know the maximum amount you can lose. With other financial instruments, you may end up paying huge interest rates, fees, the list goes on. Thus, always say no to other types of debt besides your own cash.

6. Never Take Funds from Your Savings Account nor Take On any Debt to Help Them Out

7. Analyze Who is the Person you Will be Helping

It isn’t the same thing to help an uncle who owns a business and has a solid reputation than a cousin who is unemployed and isn’t considered the responsible by most people. Analyzing borrowers is basically what banks do. They analyze people’s credit history, paying habits, current income, etc. While you don’t have to engage in a full financial and credit investigation, common sense will allow you to decide if it’s a good idea or not to lend money to that person. This is the time when you can exercise saying “no” if you think there’s little chance of getting your money back.

8. Don’t Ask for or Expect Favors in Return

Let’s say the agreement has been made and you have actually signed the contract. It’s a bad idea to ask for favors. If you do so, he or she may think they aren’t in the obligation of giving the money back – since they have already paid it back somehow.

9. Don’t Criticize Them about the Way They Manage Their Finances

If they are asking for money, things may not be going financially well for them. That doesn’t mean you have to point it out. This can make them miserable and they can even start holding grudges against you – both of which will work against you receiving your money back in case you decided to lend it.

Some people will use all of their cards when asking for money. This can involve crying, telling all types of stories, and even threatening you. Whatever his or her situation, you should put your best interests first.