A few months back, I went to the border to import a new to me car. It is a cute 2006 Hyundai Tucson with over 140,000 miles. When I bought it at an auction site, only one other bidder seemed to have a small interest in it, most people where bidding on two year old cars at best. And the dealer I went with told me that even then, they could have a hard time finding a buyer for the car, as everyone seems to want a brand new one. The question that popped into my mind was “WHY?”. Why would anyone want a brand new car? Sure, the car smell is pretty awesome, it can even come with cool tech gadgets, but other than this, I see little value in buying a new car.

The only good part about it would be to have little repairs and maintenance, which would be great, but in that case I’d rather go for a leasing option and instead of paying a car loan every month, pay for a hassle free car experience, where you just have them handle the car if something goes wrong. 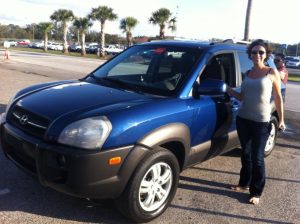 Your new car will depreciate instantly

As soon as you walk out of the dealership, you car loses value. 15 to 25% just the first year. On a £20,000 car, that is £5,000, lost in 12 short month! When I bought my first car ever, which was six years old at the time, I already took a £500 hit when I sold it back a year later. Still, that is better than £5,000. Unless you plan on keeping your car forever, which seems unlikely if you enjoy new cars, it doesn’t seem like a very wise operation.

No need to be a math genius, financially savvy used cars cost less than new ones, hence are easier to pay cash for. I had the option to sell my car before buying this one, or trade it in, which usually means less hassle, but less money. Ideally, that and your savings would allow you to pay cash for a new car.

Taking out a car loan to pay for a new car means adding 60 or 72 monthly payments to your existing budget. Can you even afford it? I know I wouldn’t like to still be paying for my car, to the tune of £300 a month or more, five years after I bought it. When the novelty wears off, making your car loan repayments becomes tedious. And if you miss a payment, you may affect your credit score. You may also be able to borrow less if you want to get a mortgage on a house, because you are already in debt.

Your new car will cost more in insurance

New cars cost more to insure. My old car already had a £600 per year insurance premium which seemed pretty hefty, and I wouldn’t have wanted anything over that amount, just for the privilege of driving a new car. I would feel more at risk with theft too, so would probably take up the full package, including cosmetic damages to my car, broken windows, robbery, and so on. While with a used car, I would park almost anywhere without worrying about a thing.

Bottom line, for me a car is just an item that allows me to go from A to B without too much trouble. As long as it runs, I am good. A car is not an asset, it loses value over time, unless you buy a classic car.

So before you make your decision, do your research, and make sure it is the right move financially, one you don’t end up regretting down the road.