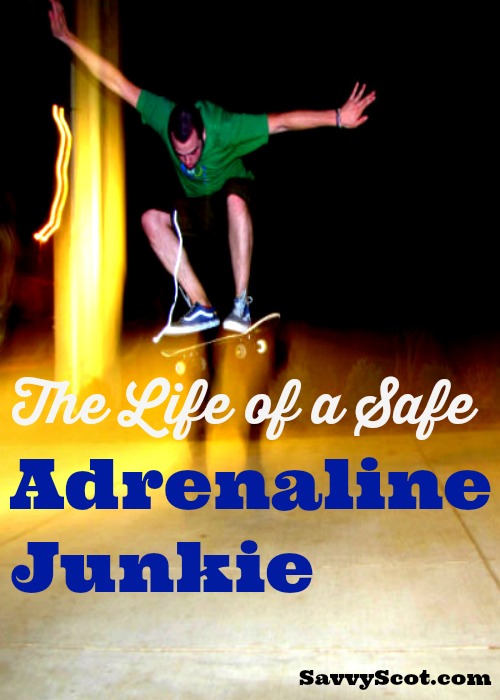 Adrenaline Junkie: Addicted to the Rush

If you read SavvyScot regularly, you will know that I am a bit of an Adrenaline Junkie. That is, I like the feeling of being a little bit out of control and the idea of playing with danger. While I love the feeling that this brings, I would rather be able to do it safely! The real trick is, managing to trick your body into this feeling, but where you actually have measures in place to mitigate the risks.

For some, this involves playing a video game – they become so absorbed and enthralled in a game, they actually get a real adrenaline rush from driving a sports car round a track with a controller. For others, this engagement is simply not possible.

For others, a lack of understanding helps to create doubt, which in turn leads to an adrenaline rush based on unknown consequences. An example of this might be flying on a plane; some people have a fear of flying, often based on the fact that they don’t understand the physics and engineering behind flight.  They cannot comprehend how a man-made object can simply take-off into the sky in a controlled manner.

The Problem With Being Smart

For those who are seasoned adrenaline junkies – who have tried many extreme sports and truly understand the risks and science involved – they start to lose the rush. The same skydive and rock climb don’t give the same rush they once did. Similar to a drug addict starting on the softer stuff – more and more (and harder and harder drugs) are required to give the same ‘kick’.

Most of us have an irrational fear of some sort – spiders, heights, dogs, cats, water, flying, driving … etc. Sometimes we can take advantage of these to get a real kick. Some people overcome their fears and others end up forever addicted to the rush.

Lost the Rush: How do we get it back?

Good question. When I first started riding my motorbike, I got one heck of a rush riding at 70 mph. As I became more experienced and confident, I began to realise that I could ride a lot faster. Riding at 70 began to feel normal and I had to ride faster to get that ‘ I’M ON TOP OF THE WORLD ‘ feeling! Eventually, I realised that this trend was only going to continue in one direction and the odds were against me. If I carried on trying to force a rush out of riding my bike, then I was essentially inviting an accident my way. Nearly all bike accidents result in one of two things: Death or a major Serious Injury Claim. The odds are not in your favor.

I had two options; I could either stop riding my bike so frequently or I could view riding my bike differently. Instead of a fun toy, I viewed it as a method of transport – my way of commuting. If I wanted to get a rush riding, I could book myself in at a race track for the day (free from the danger of other cars and road obstacles) and ensure I was wearing all the necessary safety equipment.

The other option would have been to stop riding by bike so frequently – I would forget the feeling of riding and my confidence levels would drop. The next time I turned the throttle, I would be unfamiliar and the rush would be back – and so this happened.

If you have found that thing that gives you the biggest rush of all – whether it be scuba diving, driving, climbing, skiing, snowboarding, wake boarding, base jumping, free running, sky diving etc. my advice is as follows: Find another thing that makes you feel the same way – and then one more. If you ensure that you have a variety of extreme / dangerous hobbies then you are far more likely to sustain them safely. When one hobby no longer makes you feel invincible, leave it for a while and pick up the other.

I have sold my bike for now as I realise how dangerous they are without taking risks. A real mix of sports – some extreme and others not – keep me living on the edge. 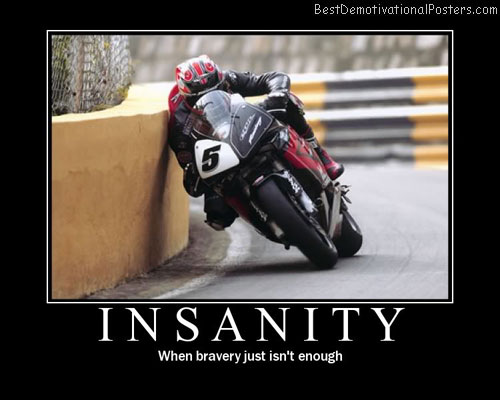 What gives you that Rush?