Have you ever tried Scuba Diving? Ever since I first put on the gear a few years back, I have been addicted. Last year, I posted about diving in Roatan – one of the bay islands in the Caribbean and then again about the amazing sensation called String of Pearls that can be seen at night underwater – My wife and I have a dream to own our very own dive center one day – in the meantime, we are exploring the world and scouting for a location (and saving a bit)!

Today I am going to take you on two dives in Mexico. The Riveria Maya offers a number of special underground caves and caverns to explore which are a pretty unique and a very special experience. Hopefully I can convince you to try it one day…

What is a Cenote?

The word Cenote translates as ‘sacred well’ to the Mayans. A Cenote is a natural sinkhole that is the result of collapsed limestone which reveals the groundwater below. There are a number of theories as to why Mexico and the Yucatan peninsula has such a vast system of underground caves, but my favourite is undoubtedly  that Mexico is in fact the remains of the meteor that hit earth and killed the dinosaurs, which explains the vast network of tunnels and holes!

Historically, the Mayan people used Cenotes as a place to give sacrificial offerings to the Gods and in fact many skeletons and other bones can still be seen in these pits today.

What is Cavern Diving?

The network of cenotes and underground passages are still largely unexplored. To enter cave systems, you must be a ‘cave qualified’ diver. Fortunately, there is an alternative for non-cave divers – Cavern Diving. While this is an intermediate step to full on cave diving for those who want to explore only the boundaries of the caves; don’t be fooled – Cavern diving will offer you an experience like no other. While the rules state that for Cavern Diving you must be able to see natural light and can only be 60 meters from the surface – these rules are often ‘adapted’.

Whenever you arrange to go diving with a shop / organisation, you will always have a dive leader. For qualified divers, the ‘leader’ of an open water dive could have any from a range of qualifications – the minimum being a Divemaster – while beginners have to be accompanied by an instructor of some sort. Essentially, the Divemaster / Instructor is the person with previous knowledge of the dive site and the area and will lead the dive, or in the case of beginners who will teach you how to dive!

With cavern diving, the prerequisites are slightly different – you must be accompanied by a Cave Instructor at all times.

We left the boundary of our 5 star luxury hotel at around 7am to use the ‘collectivo’ – the Mexican taxi. There is something intriguing to me about using local transportation when on vacation. I feel it is the only way to truly empathise with the locals and try and imagine what their life is like outside the tourist bubble.

Along with a minbus full of school kids, we sped into Tulum at around 130Km/h, braking sharply to pick up a few stragglers on the way. When one collectivo is close to another, drivers compete to pick up passengers. People = money and speed is clearly key.

After arriving at the Dive Shop, we bundled into a pickup truck and retraced part of the journey we had just taken. I should explain that the Cenotes are privately owned and you have to pay the owner of each to dive. The fee ranges from around $10 to $25 per diver and this is of course in addition to what you pay the dive shop.

Upon arriving at Grand Cenote, we looked out across the crystal clear water – which in this case is very similar to a lake or a loch: 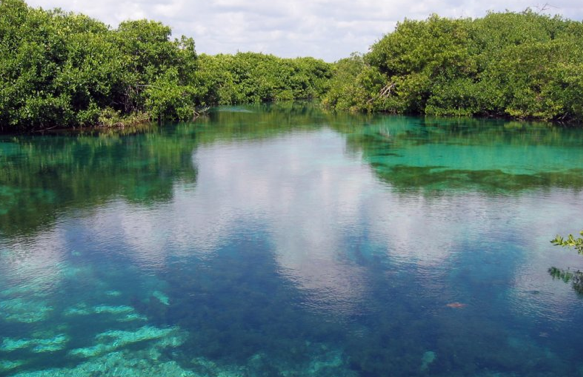 What a great place to start – no murky water or difficult entry points – essentially a shore entry dive! We spent the next 50 minutes or so exploring some small caves and pass-throughs. 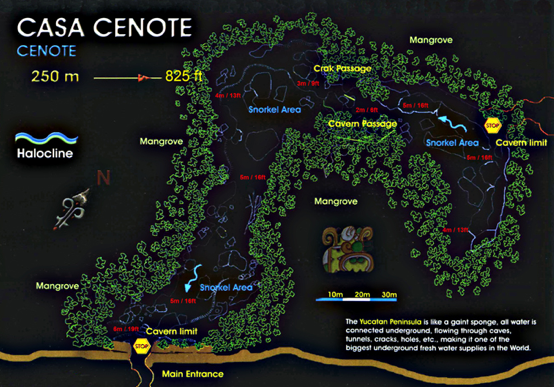 In reality, Casa cenote was a refresher dive – the cave instructor was trying to work out how good Mrs Scot and I were and how comfortable we would be in a confined space. I think we did a good enough job, because after arriving at Grand Cenote, my mind was blown.

I would go on to explain in words what happened throughout the next 45 minutes, but I feel the pictures do a much better job… 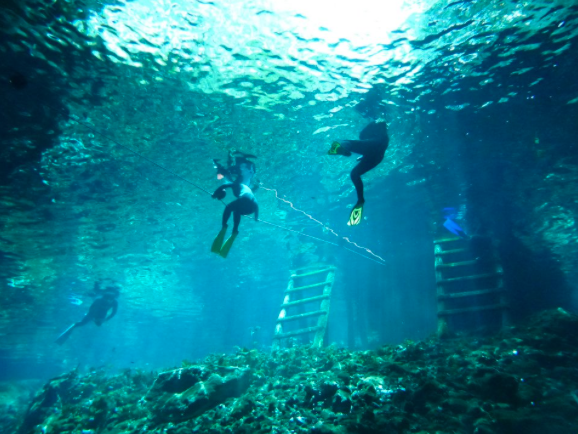 The fresh water in this cenote is SO CLEAR that the visibility is estimated at around 100m. Anyone who has dived in the sea is probably used to 25m being good! 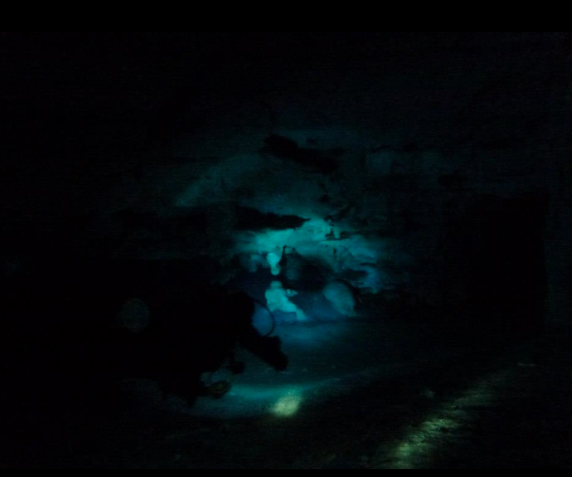 After entering the cave system, a good torch is essential. The blue light from the cave instructors course is quite similar to that of natural daylight. This comes at a price though – the torch cost over $1000! 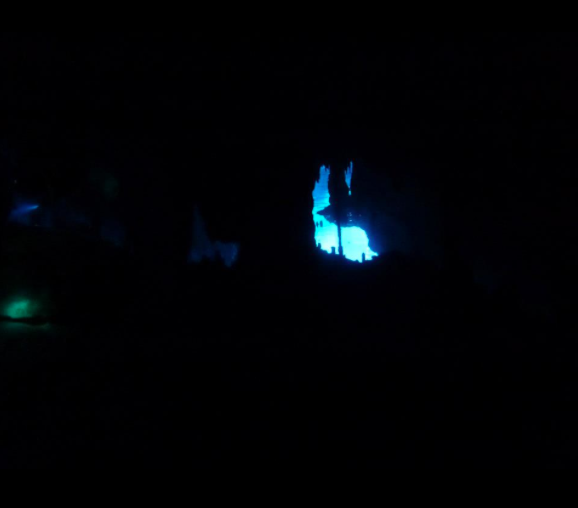 Looking back at the exit as it becomes further and further away. I am not an expert at judging distances, but we are quite far in and the adrenaline is kicking in! 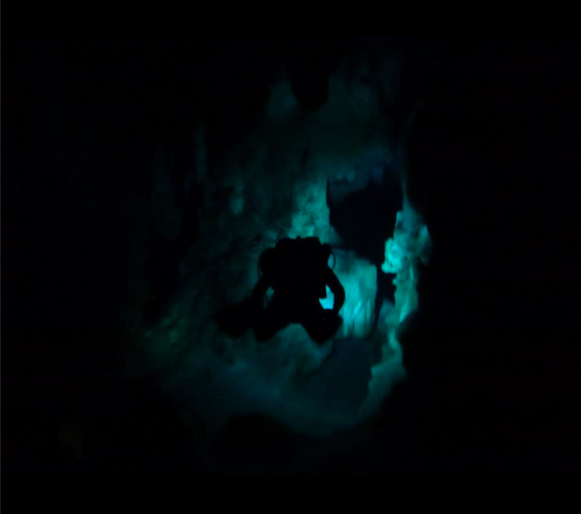 The silhouette of the diver is mysterious and rather beautiful! 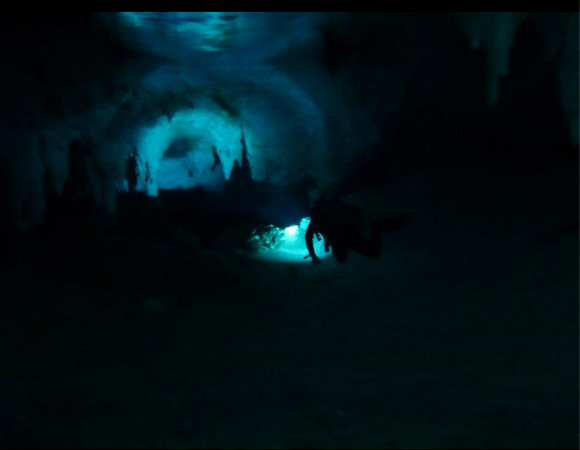 All around are stalagmites and stalactites formed by ice millions of years ago! 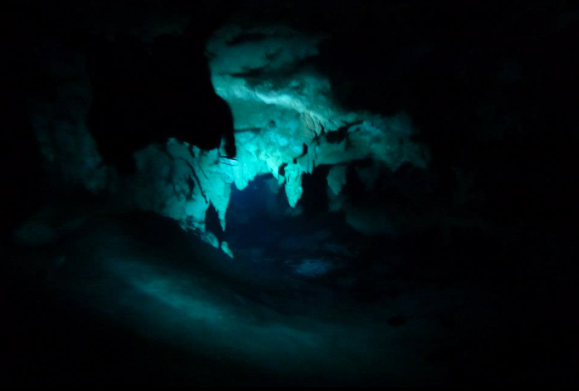 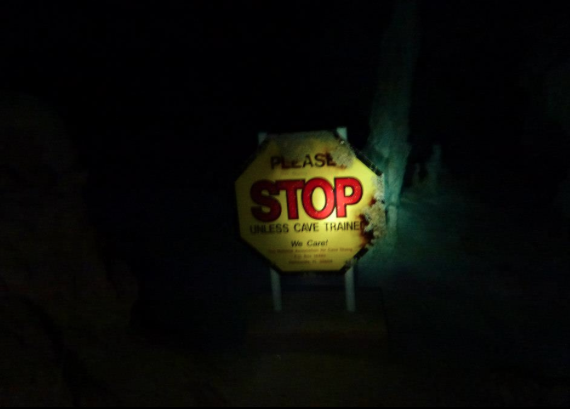 A warning sign marks the boundary for Cavern Divers. Beyond this point divers get lost and many never return… 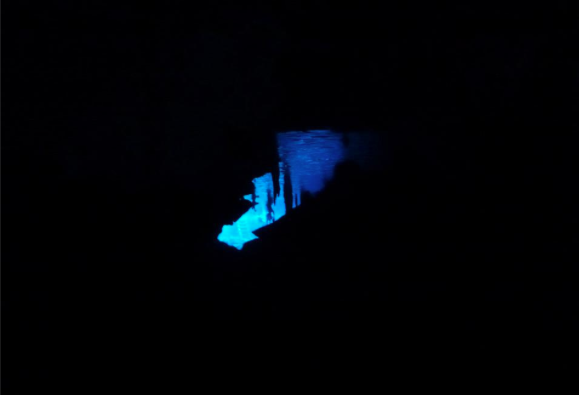 The natural light invites us back to safety! 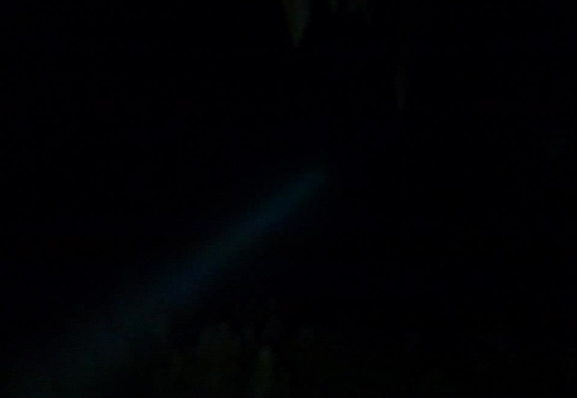 On turning round to look back into the abyss, the torch beam barely illuminates anything!

Some pretty impressive pictures huh?! One thing that the pictures don’t capture is the feeling of passing through the Haloclines – the layer where fresh water and sea water mix. For a few seconds, you can’t see anything but a blur – a temporary feeling of blindness. Furthermore, the temperature messes with your head as you go from a cool 23 degrees to a warm 26/27!

One disclaimer on the above photographs would be that at ‘only’ £600 ($1000), my underwater camera setup is very basic. While these pictures appear beautiful, there is much that I could not capture and beauty that remains a secret.

That said, the following 2 days of diving were more beautiful still and the pictures even more impressive!

If you enjoyed this post, please be sure to return soon to read about the cenotes!

Do You want to Dive the Cenotes Yet?