Apple’s shares have skyrocketed to almost $700 each today, after they announced pre-orders of the iPhone 5 have reached in excess of 2 million units!!! Comparing this to the iPhone 4 which obtained 600,000 pre-orders and the iPhone 4S of 1 million – this is HUGE! What is more, the company’s shares have risen over 70% this year… WOW!

Consider Apple’s stock over the last 10 years: (if you are new to investing, not many company’s stock charts look like this) 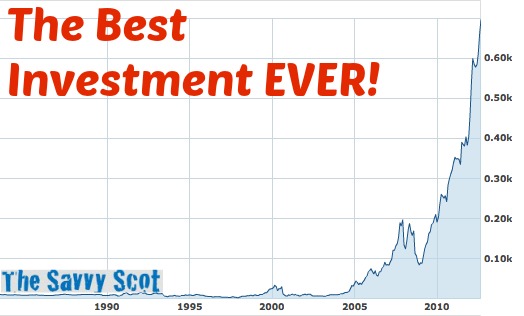 You need an awful lot of money in the first place to invest in a company like apple when an ordinary share is priced so high.

I know of a guy that put £10k into Apple 10 years ago… that was the best investment decision EVER!