If you read my last post ‘Sunday Update‘ you will know that I was supposed to be climbing mountains around the UK all this week. Unfortunately not everything went to plan.. Here is a quick recap of what happened:

We departed Edinburgh at around 7am on Monday morning. This allowed us plenty of time to travel to Fort William on the west coast of Scotland – the place that is home to Scotland’s biggest mountain – Ben Nevis. The whole way there, it ‘pished’ down (this is a Scottish word for VERY HEAVY RAIN)! Upon reaching the foot of the mountain, it was still raining like crazy. We sucked it up, put on our waterproofs and all our new gear; and set out. 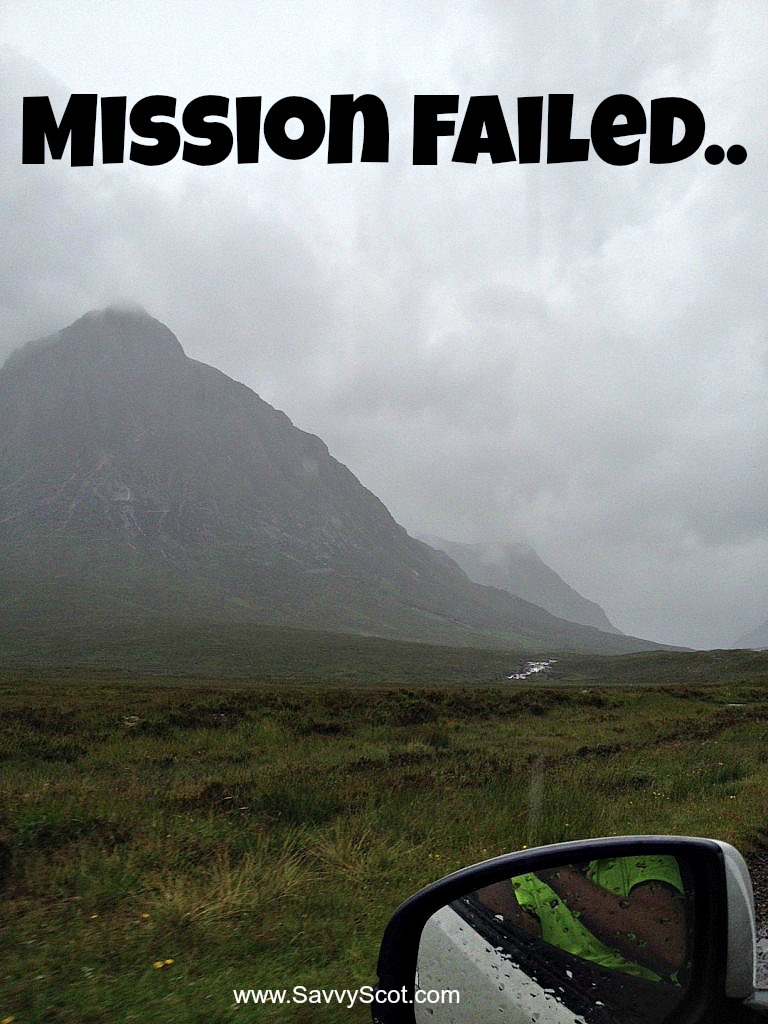 Although soaked to the skin, we made it up and down the mountain in sub-4 hours, which is an excellent time by anyone’s standards (a good time is around 5 hours)! We arrived back at the car, made some food and tea and started the long drive to Wasdale-Head in the Lake District. This is where the fun started: the rain got heavier and heavier and heavier. It became apparent how bad the drainage systems were on the country roads as we aquaplaned every few hundred meters. Eventually we made it to the foot of Scafell Pike (England’s highest mountain), although tight against our timetable due to the delayed journey.

We had always planned to climb Scafell Pike in the dark, however this seemed even more daunting with the low-lying cloud and torrential rain! Having come this far, we once again sucked it up and put on our waterproofs and head torches and set off.

There was NO light pollution here; no moon, no stars nothing. Without our torches we were consumed by the darkness. At one point we put our torches off and let our eyes adjust. All that we could hear was the howling wind, the sound of rain on our jackets and the roaring of mountain rivers; we could see nothing!

The deluging rain had created a new set of problems. The stream that we had to cross had become a fierce and roaring white-water river. It must have taken us half an hour of walking up and down to find a suitable place to cross – with only the few meters of light ahead of us that our head torches could provide. Eventually, with some careful walking pole placements, we managed to get across – however I was already concerned about the growth of the river over the next few hours before we had to re-cross on our return.

The next few hours were a bit of a blur. I had to substitute my walking boots with ankle support for my trail shoes. Although both Gortex, they could not compete with the rain. My feet were soaked through, as were my trousers and jacket. I had a lot of time to re-think my life and every other possible scenario. Talking to my friend wasn’t even possible over the sound of rain, wind and rivers. I felt alone and extremely challenged.

To make matters worse, the map was no longer readable. Not only was it soaked, but the rivers that were marked had burst and turned into many. Luckily we had a walking app with GPS on the iPhone and we could retrace our trail in worse-case scenario…. After what seemed like days, but in reality was a few hours, we neared the top of the mountain.

It was on the descent that things went wrong. The grassy path and moss-covered boulders turned into a death trap. We had to walk at half the speed we did on Ben Nevis, exercising extreme caution with each footstep. Such caution was not always enough, as I managed to slip and crack my forehead, giving myself a nice black eye and bruised thigh.

As predicted, the original river that we crossed had become a very freaking big river. There was no way that we could safely cross the high-speed rapids. We ended up climbing up to after the river split and crossing it in a number of stages. Long story short, we ended up waste deep in freezing water whilst trying not to get swept off our feet.

Thanks to the GPS, we were able to traverse down the mountain and eventually meet our original path. 5 hours after setting off and WAY behind schedule; we arrived back at the car. We had a second set of gear / boots soaked through and due to the lack of roads above water (the national park had turned into a giant lake) took another hour to travel only a few miles. Damn sheep did not want to get off the road!

We checked the weather forecast for Wales and were informed that the weather was set to continue. We did the sensible thing and called it off. I am sad we did not get to finished, but I know we did the right thing. We probably shouldn’t have even attempted Scafell Pike in the conditions that we did – but it was certainly an experience.

We drove back to Edinburgh and I used some air miles to get a (almost free) flight home.

What adventure have you had recently?