The recession hit a lot of companies very hard in 2012. In the UK alone, numerous big high street names were forced to shut their doors. From the massive electrical store Comet to the huge sports seller JJB, dozens of other companies were forced to call in the administrators. 2013 looks to take many more, with the news today of Jessops (photography) looking to follow suit. Many others face an extremely bleak outlook: Optical Express, Hein Gerrick, Clinton Cards, Game Group etc.

The recession has undoubtedly changed most people’s attitude towards finance in some way. Although not necessarily direct, the recession has affected us all in some way; from one extreme of being made unemployed to the other of no longer being able to shop in your local deli store – there is no avoiding the effects.

Detriment aside, the recession has actually led to fruitful growth of a select few companies in ‘niche’ sectors. Consider the following sectors and the positive growth they have seen over the last year: 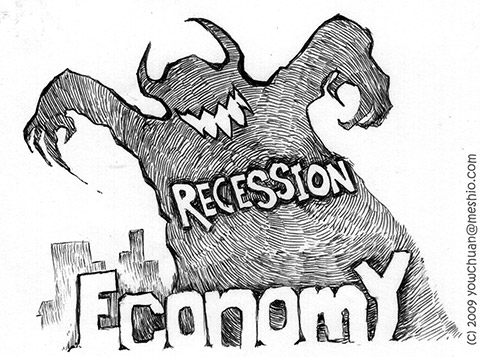 For those of you who have been around here a while, you will know that I absolutely despise Payday loans. In my opinion, the interest rates are absolutely criminal and I can’t see how they could ever help someone in difficulty. Unfortunately, the recession has caused increasingly more families to live paycheck to paycheck… and sometimes not quite making it. Consequently, payday loan companies have made a small fortune by ‘plugging the gap’ with a short term loan.

As people are finally becoming more financially astute, they realise the great deals to be had with comparison sites. From credit cards and loans to house/car/pet/breakdown insurance; numerous comparison sites have made a fortune in referral commission from top insurance companies. A win-win situation in my opinion! Just be careful to inquire direct too – prices can fluctuate!

Games like bingo from Ladbrokes and Texas Hold’em Poker have seen a huge rise in popularity. As technology and internet connections become more reliable, online gaming and entertainment has seen huge growth. This includes streaming movie / TV services like Netflix and Lovefilm. I predict this will see the extinction of movie rental shops in the next year or so.

Although not always the cheapest places to shop, discount stores are becoming increasingly popular. From Pound shops / dollar stores to discount supermarkets, one thing is for sure; we all love to think we are getting a bargain. Be extremely careful when shopping in discount stores. Promotions are often exaggerated or pack sizes / portions reduced to subconsciously trick people into thinking they are getting a better deal. It is a widely known fact that chocolate / sweets manufacturers create custom sized packets for some discount stores in the UK – say 6 bars instead of the standard 10 from the supermarket – to enable them to undercut supermarket prices for a ‘pack’. In reality, you are paying much more on a ‘per item’ basis. Be diligent in checking your cost per portions! My general rule of thumb is that because supermarkets have much higher buying power than any other outfit; the likelihood is that the best deals are to be had there.

The recession has hardly touched the big energy companies. People still need to heat their homes and cook themselves food – these companies have an almost guaranteed income! In fact, energy companies in the UK have ignored the fact that people are struggling to make ends meet, with some companies raising prices by over 10% last year!

As digital forces the ‘real-world’ to close down, it is no surprise that dozens of tech companies experienced fantastic growth rates in 2012. Forbes listed the highest growing tech company in 2012 as LinkedIN, with a sales growth rate at a staggering 115%. Perhaps everyone is updating their CVs and doing an extra bit of networking as a precaution to what may lie ahead.

How has the recession affected YOU?