For those of you who have been following this blog for a while, you will know that I like to think of myself as a little bit of an adrenaline junkie. From fast motorbikes to free climbing and diving with sharks to diving out of planes – I love it all. When I told my mum recently  that I would love to take up Base jumping (or at least give it a go) she was absolutely shell shocked. She couldn’t understand why I would want to ‘risk killing myself’ like that.

My mum’s opinions are probably no different to a lot of others. Risk however, is a very subjective assessment of a situation. We can see this in countless examples in life around us. Money, driving, drug-taking, drinking, smoking, extreme sports, decisions – everything has associated risk, or at least a perceived risk. For example, personally I think taking drugs is an extremely risky idea. For one, I have no idea what I am actually taking given that it has undoubtedly been mixed with a concoction of other things. And for two I have no idea how my body will react and if I could get caught by the police.

Other people have different attitudes. Millions of people experiment with and regularly take drugs. They probably still perceive the risk, but mitigate it by buying drugs from ‘reputable’ dealers (if such a thing exists) and experimenting in ‘safe’ conditions – i.e. with others around them, plenty of water and out of sight of law enforcement.

Is Taking Drugs a Good Idea?

Still definitely not in my opinion! The point I am trying to make is that risk is perceived differently by everyone. One family might think that investing in the stock market is far too risky and keep all their money in a bank; where another family will do some research and understand the risk, try to mitigate it (perhaps by diversifying their portfolio) and be quite comfortable with their choices. Other families might invest but won’t bother doing any sort of research / mitigation and might not care… then things come down to fate. They either get lucky because they picked the right stock or they lose a lot.

The same analogy can be applied to personal finance. Some people see finances and saving as something that doesn’t really matter too much.

You only live once. Take out a credit card and go on holiday. Deal with the consequences later.

We all know someone with this kind of attitude. Unfortunately as responsible PF readers we all know that this attitude soon fades when the debt collectors come round or things get really bad. Others will plan for the unknown and live a life of extreme frugality.

To make matters even more complicated, risk is an entirely personal concept. While most risks are transferable between different situations, the outcome of the same actions can be very different. For example:

The Risk: Losing our job -a very generic risk, which is applicable to almost all of us

The Outcome: Entirely Variable. This is where things change; some people are prepared and have put measures in place to safeguard themselves against unemployment. Savings and other backup plans would tide them through the situation; living paycheck to paycheck would almost certainly bankrupt you.

Take a look at your life and consider what risks are present. Do you have a contingency plan? You may have very unique risks as well as generic ones. Self-assess your situation and prioritise what could go wrong.

SO… Is Felix MENTAL? 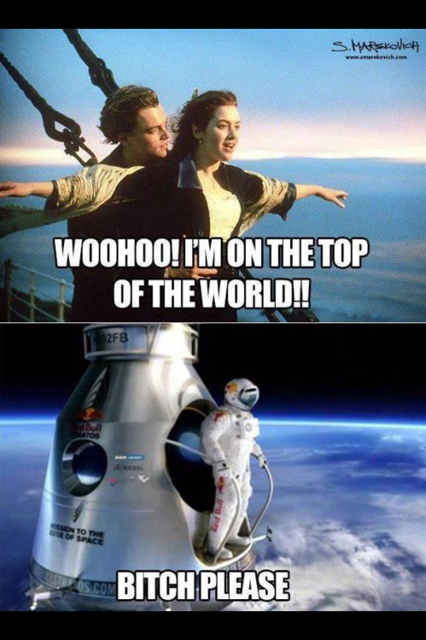 I don’t think so. I watched the Red Bull documentary which covered the whole story of Felix’s journey to the edge of space. A lot of people watching the live show don’t know that Felix actually encountered a problem with the heater on his visor on the way up: his mask was fogging up. I watched as Felix assessed the situation (the live cameras were turned off at the time of broadcast) and looked at the possible actions and the associated outcomes.

This documentary showed a very calculating and risk-adverse side to Felix that was not portrayed through the media. Felix was clearly concerned about living – that was obvious! As most of the world knows, Felix continued the ascent to the edge of space and made the jump. He broke the free-fall speed record and made it back safe. All despite the visor being foggy for most of the way down and almost spiraling out of control.

What Does All this Mean?

Some might say he was a lucky ‘crazy-man’; I say that he is a role model. If the rest of the world had even a tiny slice of Felix’s attitude towards risk and applied it to personal finance and their lives in general, the economy would be thriving!

Risk is not just something that is present in jumping out of planes or driving fast… Risk is everywhere. Stay safe guys!