Good morning everyone! Today, my VA Clarisse will share how they spend their Christmas Celebration in the Pinas “Philippines”.

Since I was a teenager, one thing that I’m looking forward is the Misa de Gallo which means “Rooster’s Mass”. It is a series of nine masses that starts on December 16 at 4:00 A.M. and ends on December 24. But some churches start their mass as early as 3:00 A.M. I usually make sure that I’m already in the church at 3:30 A.M. because there are lots people during that time and if you arrive late, then for sure you will be standing throughout the mass. In traditional Catholic belief, completing the novena (nine masses) is also supposed to mean that your special wish may be granted. It’s a very old tradition being passed on to generations and to the next generations. Last year, it was the first time that my seven year old daughter, completed the nine masses and she was very happy! She told me that she made a wish, but she just kept it within herself because she believed that if you tell your secret to another then it will not come true. hahaha! 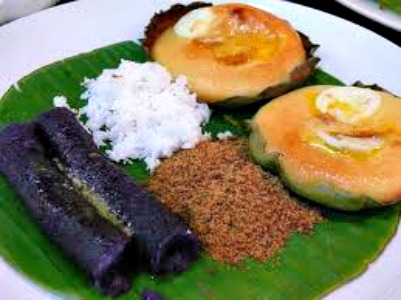 And another nice part of this early mass, you can buy lots of Filipino foods like rice cake called “bibingka” which is freshly cooked between hot coals. You can also make it special by adding cheese or egg. And also the famous “puto bumbong”, it’s unique because of its purple color. It’s made of glutinous rice and steamed in a small bamboo tube. You can pair the foods with hot chocolate or hot coffee.

The Misa de Aguinaldo is celebrated on December 25 and is usually one of several Masses that all family members (including non-churchgoers) are present. And during Christmas Eve, we usually celebrate by going to Midnight Mass, followed by the traditional Noche Buena feast, where the family members dine together at around midnight, which includes: queso de bola “ball of cheese”, spaghetti, hamon “Christmas ham”, fried chicken, ice cream, cakes and all kind of salads, macaroni salad, buko salad “coconut salad” and fruit salad.  And also, who would forget our famous Lechon Baboy “roast pig” that is served as the most important food in the table. Also make sure that your gifts are already prepared because before Christmas Eve, your goddaughter or godson will come to your house and pick up their gifts.

When I was a child, I thought that Christmas was only showing and wearing your new clothes and how many gifts you received, but the true spirit of Christmas is spending time with your family even if you have little food on your table. Christmas is a time for giving, sharing your love with your friends and family, time to ask for forgiveness and forgive those who did you wrong.

How about you, what is your Christmas tradition?