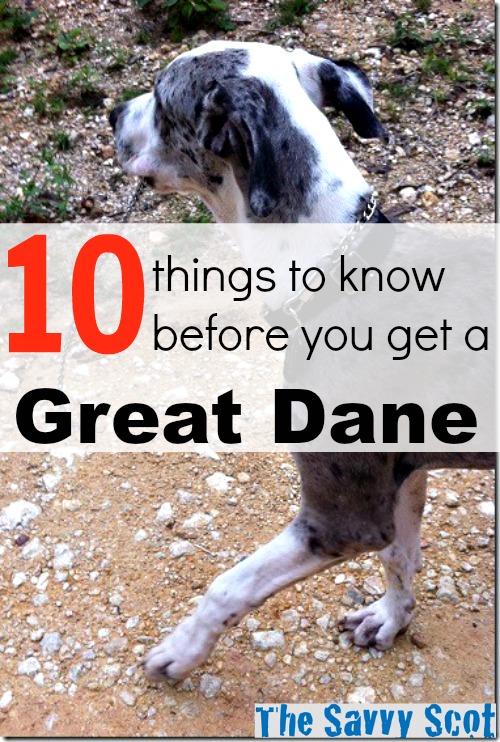 Little Napoleon, the cutest Great Dane to ever walk the Earth, has been with us for a few months now, and in an attempt to see how to keep him happy and healthy, I have learned quite a bit that I wanted to share if you are considering a giant breed.

I know, duh. He was so tiny as a puppy he fit in the motorcycle pannier to get home, but I think he will get almost as big as the entire motorcycle. The average height of a Great Dane is around 90cm, 180cm if they stand, and the average weight 120lb. That is a small adult! Think about it when it is time to go on a road trip or take the plane… Most hotels, restaurants, malls.. won’t have them, so they need a temporary home while you are away. 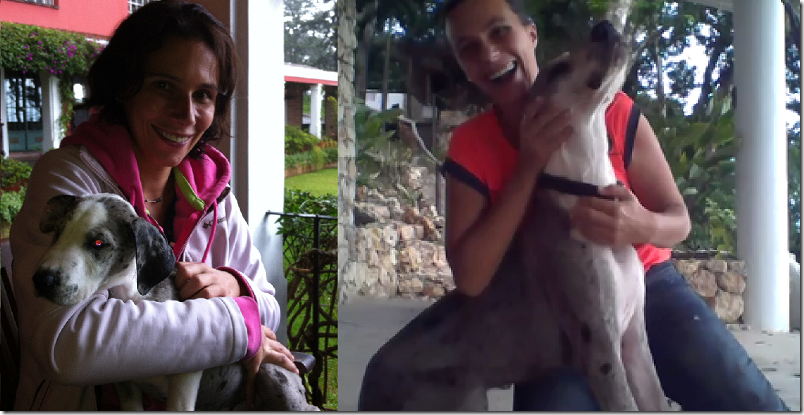 They drool. A lot.

Napoleon drools on the floor as he naps, which can be cleaned easily. But he also loves to show his affection by drooling all over me. All your clothes are stained in a matter of minutes, and if they lick your arms, you are good to go wash as well.

They think they are small.

Little Napoleon seems to think he is a lap dog. So now that I can’t even carry him for two steps, he will come and try to sit on my lap, as before. It will also happen with other dogs, as he tries to play with them, but they are scared away. Smaller but older dogs can get a bit aggressive when he goofily approaches them.

They will bite you just to play which doesn’t hurt but can ruin your outfit, and their big nails will scratch your skin.

They get separation anxiety.

I can’t go get a drink to the kitchen without him following me from the room and back. It is really cute, but if you need to work, they can’t really stay alone at home or they will destroy everything.

Guatemala is great for that as we have staff to take care of him. But if it’s just me and him, he has to go wherever I go or he cries.

If you are going to be away, to avoid destruction, they need a safe place to stay. I would never cage him so we can put him in the old hens garden which is around 100sqm in case we go and there is no staff to look after him. At home, you would need to fence part of the garden for the Great Dane if you don’t want to see flower beds destroyed and other disaters.

They are couch potatoes

Aside from loving to follow me on walks, runs and beer runs, Napoleon spends most of his days laying at my feet. He goes play in the water for a while, or chases the ducks, but that’s about it. If you want an active dog, look for another race. That says, it is heaven when he sleeps for the full 8 hour ride to Guatemala City without asking for food or a bathroom break.

They eat a lot.

Great Danes eat a lot, so they can be really expensive to maintain. A 50lb bag of kibble will last about 3 weeks for adult dogs. I put Napoleon on a raw meat diet, with chicken legs being around $1 a pound here, I am looking at $2-3 per day roughly, to feed him. That’s $100/month. Some people have a lower grocery budget for themselves!

They get health problems.

Wikipedia says Great Danes live 6 to 8 years due to their rapid growth, as they generally develop joint problems, experience bone pain, and bloat. That means a higher vet bill for you, and probably a shorter lifespan than other dogs, although I have read about Danes living 10 years.

They are harder to handle

If you are patient, you can train them fairly well. But it is harder to bathe a bigger dog, and I have looked into nail trimming and teeth cleaning as well, for which you need a special brush and beef or chicken flavored dog toothpaste (with yours the dog will get sick), and putting your fingers in that big mouth is a challenge. I bathe him in the lake but can’t really imagine having to do it in a shower cubicle.

At least Napoleon is. He is sweet, gentle, always up for a walk, rarely hyper, and in spite of his goofiness he behaves quite well with no training. I mean, do you know many dogs who will self-walk themselves with their leash in their mouth?

If you own a dog, what are the pros/cons of the breed you chose?