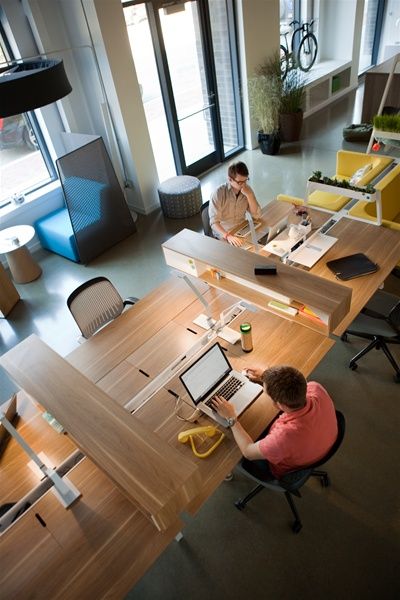 Doctor Patrick Mahony takes a look at this now widespread practice that is being increasingly criticized.

Hailed as the key to efficiency and great team dynamics since the mid-80s, the open space configuration is far from being a universally-good idea.

Welcome to the era of professional roommates. An era of shared space where desks are lined up and all look alike. Forced to live together in an open space, employees often feel awkward with regard to their everyday environment. Since its arrival in Europe in the 70s, the open space (or open office) has had to deal with many critics and has inspired books, TV shows and been the subject of academic research in the fields of human resource management and psychology.

The open space is something of a theater stage where your every move is seen, interpreted and used to draw conclusions on your personality and work performance. “The phone calls, travel plans, demeanor, daily output and office hours are all part of the mutual and perpetual judgment colleagues are exposed to”, explained Patrick Mahony.

In the US, 70% of all offices now have open-floor plans where workers share their space. Humans are highly sophisticated animals who function best in groups. Everyone has an innate capacity for empathy, of course, at different levels. Empathy is the ability to understand and share the feelings of others and is a building block of any functioning group. From an evolutionary point of view, empathy is probably one of the biggest strengths humans have developed as it creates a shared consciousness, or meta-entity for which each individual member takes a share of responsibility towards the common goal (survival).

“But what happens when you experience all the negative emotions of everyone else in the open space, day after day?” asks Patrick Mahony.

Dealing with negative emotions of others, on top of one’s own stresses can become a truly overwhelming element at the office. As explained by Patrick Mahony “In individual offices, you get to deal with your issues behind closed doors, step out with a poker face, smile at your colleagues and go back to work. As hypocritical as this may sound, you have actually just done a great favor to your employer by not transmitting your grief to your coworkers.” This concept is virtually non-existent in open space offices. Everything is transmitted, perceived at different levels of consciousness and ultimately raises the general stress level of the group and reduces productivity.

The basic idea and common assumption is that open space offices promote collaboration and team building, while being more cost-efficient. Needless to say this is far from being the whole picture. Socializing (in the best case), or incessant distractions, noise pollution, office politics and a total lack of privacy all contribute to substantially lower productivity. This results in a greater overall stress level and more absences, sick leaves and ultimately, a greater turnover. “Not a textbook definition of efficiency”, slipped Dr. Mahony with a hint of sarcasm.

Another important factor which is all too often overlooked is the consequences of an open space office on the physical health of employees. “Getting up and walking over to your colleague’s office a few times a day not only helps restore concentration, but the increased physical activity, however minimal, contributes to lower risks of developing cardiovascular problems and over time, may also play a part in preventing obesity”.

Today it seems difficult to move away from this wide-spread practice, but awareness of its limitations is paramount not only for the psychological and physical health of workers, but also for the competitiveness of companies.