Diversify your portfolio. Don’t put all your eggs in one basket. How many times have you heard these statements? While these statements can apply to more to just finances, the chances are that you understand that it is a bad idea to invest all your cash in one stock, or put all your money into the same property – but have you really thought about a long term strategy?

Current bank interest rates can only be described as shocking. I read an article at work today that discussed how an Aberdeen Assets fund manager has stated that the safest place for savers to put their money is in shares. While this might seem like an outrageous statement to most, he makes a good point; investing money in a savings account is a pretty bad idea. Given the current rates of inflation versus the interest rates… you are guaranteed to lose money.

In previous posts of this series we have discussed:

Method 1 – Get Paid to Browse the Internet

What is Forex Trading?

Forex Trading is something we have all probably heard about at some point – perhaps through an advert in the Financial Times or a money magazine of some sort; but do you actually know what it means? Forex trading is the trading of foreign currency (hence the name foreign exchange). Essentially, you buy one currency with another – the idea being using the fluctuating currency conversion rates to your advantage. 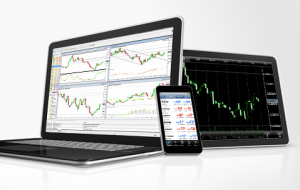 I have a great personal example of how you can make some serious money on the Forex markets. My uncle and his family live in the US after he emigrated over 20 years ago. After leaving the UK, he sold his property and left a large sum of money in a UK bank account. He owns a project management type business and a few years back had to transfer a large sum of money as collateral for an insurance bond – essentially he had to use the nest egg as a guarantee against the insurance policy for a job. He transferred the money from GBP (British Pounds Sterling) to USD (US Dollar) at a rate of approximately $2 for every £1. £80,000 of savings became equivalent to $160,000.

Now he kept this money in the bond to guarantee the insurance for about nine months and transferred the cash back to his UK account shortly after. He thought nothing of this for about a year, until he received his annual interest statement for the UK bank account. Can you imagine the shock (and delight) upon finding out that £80,000 was now over £100,000!? Now I can assure you that the bank didn’t decide to pay him 25% interest, but instead the foreign exchange markets had changed significantly: £1 to $2 had become £1 to $1.50. A case of trading the money at the right time – Had it been the other way around, he would have made a significant loss!

Who is Forex Trading For?

The simple answer is everyone! Anyone is able to trade in foreign exchange, but those who have interests and investments in multiple countries had a slight advantage as they can trade between bank accounts. For example, if I have investments in the US (or at least in dollars) and in the UK, I could benefit from having assets in both currencies and move funds when the markets are advantageous to your positions, but there can be significant fees associated with this technique. Others will use Forex trading platforms to convert money between different currencies with the intent purely to make money – i.e. there is no practical reason (like to invest in a property) for converting from one currency to the other.

You can open an account in just a few clicks with companies like CMC Markets that allow you to trade Forex directly or in the form of CFDs and spread betting.

Like anything else, Forex Trading has a level of risk associated with it. There are many resources online where you can learn about the principles of Forex and trading within the market. I highly recommend that you do some reading and research before jumping in – You can lose money as well as gain through trading currencies. That said, if you are totally risk adverse, maybe the low-interest savings accounts are a better option. You have to be prepared to lose some (if not all) of your investment or play. Similar to the stocks and shares, some currencies are more stable than others – politically unstable currencies are far more likely to fluctuate than the US dollar.

Have any of you guys traded currency? Good or Bad stories? Did you make a profit?